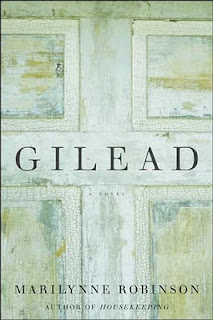 I woke up this morning thinking this town might as well be standing on the absolute floor of hell for all the truth there is in it, and the fault is mine as much as anyone’s. I was thinking about the things that had happened here just in my lifetime—the droughts and the influenza and the Depression and three terrible wars. It seems to me now we never looked up from the trouble we had just betting by to put the obvious question, that is, to ask what it was the Lord was trying to make us understand. The word “preacher “ comes from an old French word, prédicateur, which means prophet. And what is the purpose of a prophet except to find meaning in trouble?

Well, we didn’t as the question, so the question was just taken away from us. We became like the people without the Law, people who didn’t know their right hand from their left. Just standed here. A stranger might ask why there is a town here at all. Our own children might ask. And who could answer them? It was just a dogged little outpost in the sand hills, within striking distance of Kansas. That’s really all it was meant to be. It was a place John Brown and Jim Lane could fall back on when they needed to heal and rest. There must have been a hundred little towns like it, set up in the heat of an old urgency that is all forgotten now, and their littleness and their shabbiness, which was the measure of the courage and passion that went into the making of them, now just look awkward and provincial and ridiculous, even to the people who have lived here long enough to know better. (pages 233 – 234)

I made it as far as the church, and went inside and rested there for a long time. I believe I saw in young Boughton’s face, as we walked along, a sense of irony at having invested hope in this sad old place, and also the cost to him of relinquishing it. And I knew what hope it was. It was just that kind the place was meant to encourage, that a harmless life could be lived here unmolested. “There shall yet old men and old women dwell in the streets of Jerusalem, and every man with his staff in his hand for every age. And the streets of the city shall be full of boys and girls playing in the streets thereof.” That is prophecy, a vision of the prophet Zechariah. He says it will be marvelous in the eyes of the people, and so it might well be to people almost anywhere in this sad world. To play catch of an evening, to smell the river, to hear the train pass. These little towns were once the bold ramparts meant to shelter just such peace. (page 242)

John Ames, a preacher in the small town of Gilead, Iowa believes he doesn’t have long to live so he writes a series of letters to his young son. I originally started my discussion of Marilynne Robinson’s Gilead as a letter to my two sons but instead of using that format, I’ll keep my direct comments to them brief: Noah and Nate, read this book. Read it when you’re young and read it again when you’re older. I have almost thirty years to go to reach Ames’ age (mid-70s), but I would hope for the same thing he wished: "While you read this, I am imperishable, somehow more alive than I have ever been."

Ames asks “What should I record for you? … And what else should I tell you?” Ames’ letters end up being a different type of instruction than he initially intended. The letters start off aimless and inconsistent but gain focus as Ames turns more introspective. All those years of writing his sermons, “trying to say what was true”, leaves him unprepared for his own moral crisis. He recognizes it as such, wondering what he would tell a parishioner that came to him with the same problems.

Ames weaves together current events in his life with the history of his father and grandfather, both of them preachers as well. In going back over his family history, Ames describes the role of religion in settling the Midwestern states as well the personal role of religion in the inhabitants’ lives. All of this history ultimately narrows to the role of faith and grace in Ames’ own life. His good friend’s son, John Ames Boughton (Jack), returns to Gilead ostensibly to take care of his father. Ames initially believes Jack plans to continue his life-long vexation of his family as well as Ames, but through much thought and prayer he looks at Jack with a perspective of grace. "I could forget all the tedious particulars and just feel the presence of his mortal and immortal being...He did then seem to be the angel of himself, brooding over the mysteries his mortal life describes, the deep things of man.” This soothes Ames, not just from his own standpoint but also because of prevenient grace, “which precedes grace itself and allows us to accept it.”

Blessing plays a large role in the novel. Ames said he became a minister in order to confer blessings. He reminisces about baptisms, both of people and cats (when young), which allows you to really feel the creature’s “mysterious life and your own mysterious life at the same time.” Near the end of the book Ames blesses Jack Boughton as the younger man leaves Gilead, Ames' moral crisis culminating with this simple gesture. The ceremony and meaning of communion comes into play several times, most notably between Ames and his father as well as Ames and his son. With such sacramental moments throughout the novel we see the parallel between parents and their children and God and his creations.

One of the funniest sections of the book follows Ames tagging along with his father to find his grandfather’s grave in Kansas. After a trip that could have been straight out of a Faulkner novel, they find the grave and fix up the cemetery. As Ames’ father begins to pray over his own father’s grave, Ames sees “A full moon rising just as the sun was going down. Each of them was standing on its edge, with the most wonderful light between them. It seemed as if you could touch it, as if there were palpable currents of light passing back and forth, or as if there were great taut skeins of light suspended between them.” Those currents of light appear many times in the novel through acts of goodness and courage, even appearing when Ames muses of the “general incandescence” after his death.

"It has seemed to me sometimes as though the Lord breathes on this poor grey ember of Creation and it turns to radiance -- for a moment or a year or the span of a life." This transformation, of hope to realization or maybe also from ordinary to extraordinary, includes what Marilynne Robinson has done with John Ames' life.