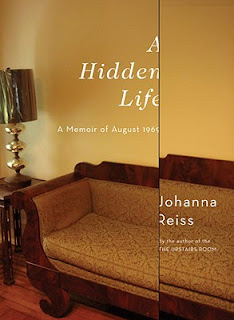 For years, Johanna Reiss’ American husband, Jim, encouraged her to return to Holland to chronicle the two years, seven months, and one day she had spent hiding from the Nazis in rural Usselo, Holland. In 1969, she finally made the trip.

Accompanied by Jim and their two young children, Reiss intended to spend seven weeks researching the book that would eventually become The Upstairs Room, her Newbery Honor–winning account of her time hiding in the attic of a farmhouse in which for a time a contingent of Nazi soldiers was billeted.

But unknown to the millions of people who went on to read her beloved classic, behind the dark and painful story of the book was a still darker tale: Reiss’ husband returned to America early and committed suicide at age thirty-seven, leaving no note.

For Reiss, an ongoing reckoning with universal tragedy becomes particular: she is forced to reckon, too, with Jim’s death—and explain it to her children. Subtle and disturbing, the book is a powerful consideration of memory, violence, and loss, told in a stunning and sparse narrative style.

I was unfamiliar with Johanna Reiss’ previous works when picking this up from the library. After reading the book I was left with mixed feelings on whether to recommend it or not, for reasons I’m still working through on both sides. Is that the mark of a good work that you’re uncertain how you feel after reading something so troubling? Or does it mean the stated aim of the work might not have been fulfilled or sidetracked?

Knowing that Jim will commit suicide after his visit to Holland makes the passages during their trip more poignant. Flashbacks to their courtship add another level of loss as well. In looking for clues while trying to find meaning in Jim's suicide, Johanna confronts actions and moments that she had overlooked or downplayed.

Certain aspects of the book rankled me, mostly revolving around the couple (the husband Johan in particular) that housed Johanna and her sister during the Nazi occupation. “Who knew what Johan did to Jim, what damage he caused during our visit? Saved two people, ha-ha; caused one to die. It had something to do with it, if not everything.” I realize part of that statement comes in the immediacy after Jim’s suicide, trying to make sense of what just happened. That statement also reflects Johanna’s allegations of Johan molesting her older sister during the war—while I don’t doubt her, I wonder at these inclusions. Between relaying Johan’s boasting about his role in saving the girls as well as this statement and her allegations, there was a strong undercurrent (or maybe not even ‘under’) running through the book that left a decidedly sour aftertaste.

Maybe part of the story hit a little close to home for me (forgive me for not going into more detail here) which would explain some discomfort. That Johanna was able to continue with her project, publishing her book as well as take care of her two daughters in the wake of her husband’s suicide, speaks volumes about her strength and determination. While no answers emerge, I do admire her laying bare everything (for better or worse) for everyone to see and experience. Unfortunately it is the ‘worse’ part which has lingered with me.