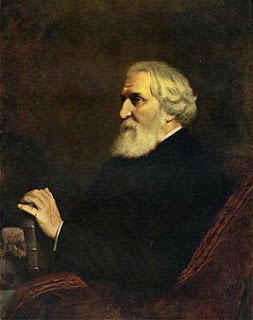 - (The original epigraph to Fathers and Children which was later omitted.)

From Henry James' 1903 article on Turganev:

Nothing that Turgenev had to say could be more interesting than his talk about his own work, his manner of writing. What I have heard him tell of these things was worthy of the beautiful results he produced; of the deep purpose, pervading them all, to show us life itself. The germ of a story, with him, was never an affair of plot--that was the last thing he thought of: it was the representation of certain persons. The first form in which a tale appeared to him was as the figure of an individual, or a combination of individuals, whom he wished to see in action, being sure that such people must do something very special and interesting. They stood before him definite, vivid, and he wished to know, and to show, as much as possible of their nature. The first thing was to make clear to himself what he did know, to begin with; and to this end, he wrote out a sort of biography of each of his characters, and everything that they had done and that had happened to them up to the opening of the story. He had their dossier, as the French say, and as the police has that of every conspicuous criminal. With this material in his hand he was able to proceed; the story all lay in the question, What shall I make them do? He always made them do things that showed them completely; but, as he said, the defect of his manner and the reproach that was made him was his want of "architecture"--in other words, of composition.

Posts on Fathers and Children

It seems my posts on Fathers and Children are almost as long as the work itself. At the risk of making this even longer, I’m going to include another quote and link. The first is from Isaiah Berlin as he describes the reaction Turgenev received upon release of the novel (from Fathers and Children: Turgenev and the Liberal Predicament):

In the violent babel of voices aroused by the novel, at least five attitudes can be distinguished. There was the angry right wing which thought that Bazarov represented the apotheosis of the new nihilists, and sprang from Turgenev’s unworthy desire to flatter and be accepted by the young. There were those who congratulated him on successfully exposing barbarism and subversion. There were those who denounced him for this wicked travesty of the radicals, for providing reactionaries with ammunition and playing into the hands of the police; by them he was called renegade and traitor. Still others, like Dimitri Pisarev, proudly nailed Bazarov’s colors to their mast and expressed gratitude to Turgenev for his honesty and sympathy with all that was most living and fearless in the growing party of the future. Finally there were some who detected that the author himself was not wholly sure of what he wanted to do, that his attitude was genuinely ambivalent, that he was an artist and not a pamphleteer, that he told the truth as he saw it, without a clear partisan purpose.

This controversy continued in full strength after Turgenev’s death. It says something for the vitality of his creation that the debate did not die even in the following century, neither before nor after the Russian Revolution.

There is something to be said for ticking off all the right people. That there was a controversy and it continues demonstrates the triumph in creating a work with “real” characters instead of having a debate of ideas between caricatures.

Coincidentally, the post today by Patrick Kurp at Anecdotal Evidence on `Serenity, Dignity and Cool Radiance' has a quote from Zbigniew Herbert looking at the direct descendents of Bazarov. Along the way, Kurp quotes Anthony Daniels (aka Theodore Dalrymple, mentioned in the Turgenev online resources post) during a visit to the University of Liberia’s library during its civil war. Turgenev makes an unexpected appearance along with the bastard offspring of Bazarov.

Update: One additional quote from the work regarding Anna Sergeevna Odintsova