eBook: A Trip of Goats by Kim Crawford 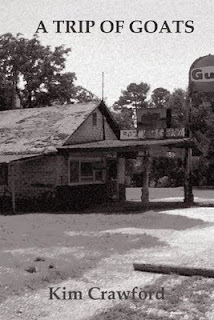 When twelve-year old Jule runs away from home in search of a mystical goatherding vagabond, he is unprepared for life on the backroads of Georgia. Jule must confront a strange menagerie of adults, from the pathetic to the comic to the depraved, and shield a young girl from the depradations of harsh life in the mid-sixties south. But even as he stays a step ahead of the private investigator his domineering father has dispatched to retrieve him, his own goal proves more elusive still.

- Book description from the book site

The book description sells short some of the better parts of the book. The book is currently available for download for $5 at the above link. I’m not much in the habit of disclaimers, but for the record I have no connection to the author other than occasionally reading his weblog.

The book covers two episodes in Jubal Lee (Jule) Jackson’s life during the summer and fall of 1966. The first section introduces the reader to Jule and his family during their summer vacation. The most important person in Jule’s life, his father and former state senator Montgomery Jackson, initially comes across as a crude and rude pleasure-seeker who only thinks of himself. As you learn more about the father, however, a more complex character emerges.

The second episode, and the bulk of the book, follows Jule’s picaresque romp through eastern Georgia as he searches for the Goat Man. Jule hopes the “goatherding vagabond” he glimpsed during the summer can help him understand why his father acts the way he does. Maybe picaresque is technically the wrong word as Jule is only a part-time rogue, displaying a sense of morality and maturity sometimes beyond his twelve years. But the characters he encounters, including the neighborhood drunk, a porno maker, escapees from the criminal psych ward (who sometimes display more sanity than those around them), and many more make for colorful convergences.

The southern flavor is strong which disproportionately increases its appeal to me. From the geographical detail(such as physical descriptions of the countryside or of landmarks like the Uncle Remus Golf Course) to cultural touchstones (whether the brief mention of a Stuckey’s pecan log or the recurring Merle Haggard song), I was transported back to that time and (a close by) place.

When reading one of Rick Bragg’s family books (All Over But the Shoutin’ or Ava’s Man), I find myself thinking “I KNOW these people,” having grown up with family and friends that exhibited many characteristics of his family. While I (fortunately) didn’t have the exact same reaction to Crawford’s characters, it was like I had heard about many of the characters while growing up. It’s what helped the story ‘feel’ real despite characters and action that descends into apparent simple satire. Or what would work well with the story, a screenplay of growing up in the South in the ‘60s.

The message delivered by the Goat Man can seem commonplace with his bland (but focused) analysis, but I didn’t mind at all. When you can identify with both Jule and his father, it’s a message that doesn’t hurt being heard often. In addition Jule gets an early lesson in the disparity between an idealized life and its reality. As I hope you can tell, I enjoyed Crawford’s eBook quite a bit. I know it’s not for everyone, but it hit the spot for me.