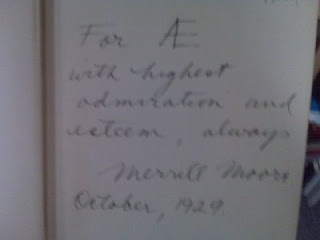 Last week I was thumbing through the books at a used bookstore and something drew me to The Noise that Time Makes by Merrill Moore. Upon opening the cover, I was surprised to see the above inscription (I'm not sure why the photos turned out so poorly other than the store was barely lit in this section). Unfamiliar with the name, his biography painted an interesting character as a psychiatrist, poet, and literary gadfly. Biographies can be found at
Wikipedia,
the educator's website for the American Collection has two essays on Moore by William W. Applegarth and Monica Kent, and
Vanderbilt Medical Center's biography (includes a few pictures).


Ted Nellen's Cyber English site has a few of Moore's sonnets, of which I copy one below.

Some night, John Carter, you will dream of hands,
Hands that are dead now, or as good as dead,
That you killed, or as good as made them die
Along the road that you have prospered by;
And I will never envy you the dread
With which you must awake then, as you see
Hands stretched towards you, striving, piteously
Stretched, beseeching, grasping at what was taken,

Hands by pain and grievance sorely shaken
And pointed at you while your agents keep
The power you've gained in this and other lands -
Some night, Mr. Carter, you will dream.
But it will not be an untroubled dream,
And, oh, I shall not envy you your sleep.

I have no idea who John Carter is...historical figure? patient?...but I don't envy his dreams. 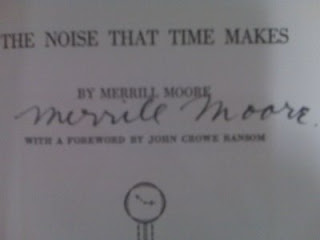