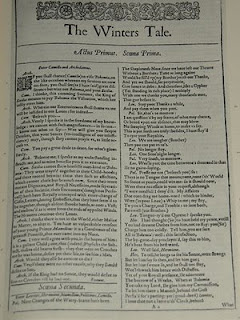 Most of the so-called “romances” of Shakespeare get mixed reviews, sometimes called failed experiments. The blending of tragedy and comedy in A Winter’s Tale mimics the fine line in real life between the two (and the play itself seems to be making somewhat of a comeback). While the whole is enjoyable what really stands out for me are the characters that were created, especially Autolycus. His enjoyment of everything life offers him is a joy to watch or read. The interplay between Florizel and Perdita gives one hope that they will transcend Shakespeare’s usual dour view of long-term happiness in marriage. Leontes’ descent into madness driven by sexual jealousy and Hermione’s calm defense of herself can be chilling to observe. And while the statue coming to life reads like one of those old tales that can be scarcely believed, it does make for wonderful theater. As is hinted at several times in the play, we are watching a story so the task is not to make sense of it but to enjoy it. Which I did.

Possibly there are other deeper things going on inside the play, such as operating at several levels in a pre-Freudian manner. There are the subconscious drives, such as Leontes’ jealousy and what it drives him to commit or Florizel and Perdita’s love. There are many social and conscious actions, whether Hermione’s defense or the shepherd’s taking Perdita in out of the elements. And there is some higher realm of things, such as Paulina’s protection of Hermione on up to the fantastic of Hermione’s reanimation. “Amazement” and “wonderful” are used a lot in the play and that it sets the stage for several amazing scenes. The Triumph of Time may have been the subtitle of Greene’s work that Shakespeare started from, and while Time is a character in the play he is unable to heal all wounds.

Online Resources for Shakespeare, and The Winter's Tale in particular

2005 DVD with the Royal Shakespeare Company