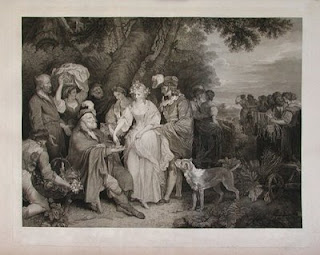 The act opens with Leontes lamenting his loss of Hermione, with a scolding Paulina to continually remind the King that he is responsible for his wife’s death. The effusive praise heaped on Hermione does get tiring, begging the question of how Leontes could have reacted in the manner he did or demonstrates how demented he was from jealousy and paranoia (or both). Florizel arrives from Bohemia with Perdita, pretending to represent his father with an official visit. Praise is showered on Perdita in a similar manner as that which had just been bestowed on Hermione. Word arrives from Polixenes, however, that the young couple should be arrested. Leontes appears interested in Perdita, much to Paulina’s dismay (impugning less than honorable designs in the King’s ardor) but he promises his intent is chaste. Camillo’s previous comment that “Prosperity’s the very bond of love, / Whose fresh complexion and whose heart together / Affliction alters.” (IV. Iv. 574 – 576) is echoed by Leontes’ remark that he is sorry Forizel’s “choice is not so rich in worth as beauty, / That you might well enjoy her.” (V. i. 213 – 214) Perdita’s beauty and bearing, recognized as higher than her station, only gets her so far.

Scene ii is interesting in that the revealing of Perdita’s ancestry and the reunion of the two Kings both happen offstage and are narrated by other characters. “The dignity of this act was worth the audience of kings and princes; for by such was it acted.” (V. ii. 79 – 80) Shakespeare chose not to show it to his audience, but I don’t believe it reflected on their lack of worth. The final revelation is more powerful since it is the only one performed on stage. In discussing the statue of Hermione, the topic of art vs. nature is raised several times. All the serious parts of the scene are blissfully tempered with the appearance of the shepherd, his son, and Autolycus. The shepherd and his son are getting used to their new status of gentlemen, conferred on them for their part in producing Perdita’s heritage. There have been several clear comments in the play regarding the playwright’s time but this skewering of the higher ranks is the funniest (not the least because Shakespeare is also poking fun at himself). Is there hope for a similar improvement in station for Autolycus? He leaves us at this point and the disappointment from his promise to go straight in his employment (with Florizel again) is offset by the expectation that he will revert to his old ways soon. What we have had described in this scene (the revelation and reunion) is compared to an old tale to be told but not believed (and will be compared this way yet again), events that would never happen in real life. It’s a nice reminder that we are watching a play and an invitation to relax and enjoy the final improbable revelation.

The final scene revealing Hermione to be alive is the ultimate blending of art and nature, from statue to human. The truest joy resides in the characters from Bohemia. While the Sicilian characters have a happy ending, it is a bittersweet joy. Leontes and Hermione are reunited, but sixteen years (in seclusion or in penance) have passed and they have lost their son. Paulina, the person most responsible for the happy endings has lost her husband, although Leontes dictates she shall marry Camillo (leaving one to wonder if that is a good or bad thing for the lord). Perdita is the one Sicilian with a “happy ending,” but even that is open-ended. No marriage portrayed in the play shows marital happiness for an extended period of time, so there is a nagging doubt as to the ultimate outcome of the young couple. Their celebration of nature and each other In Act IV, however, gives rise to hope that they will be the exception. The one true joy, unadulterated and unflagging is Autolycus. His character shows the most self-understanding and delight in whatever comes his way. His baser celebration of nature, particularly sex, feels more natural than the elevated discourse of Florizel and Perdita. While those around Autolycus might be lighter of purse, they will never want for entertainment. 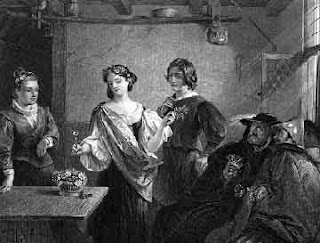 Florizel and Perdita
Charles R. Leslie
Picture source
Posted by Dwight at 6:36 AM