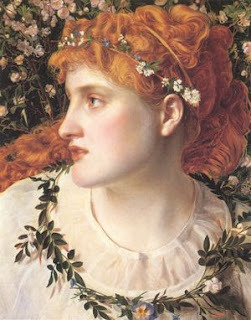 The passing of 16 years is performed by the character Time, who begs our forgiveness with liberties taken in speeding ahead and also fills us in on what has happened:

Leontes leaving,
Th’ effects of his fond jealousies so grieving
That he shuts up himself, imagine me,
Gentle spectators, that I now may be
In fair Bohemia, and remember well
I mentioned a son o’ th’ king’s, which Florizel
I now name to you; and with speed so pace
To speak of Perdita, now grown in grace
Equal with wond’ring. (IV. i. 17 – 25)

”I mentioned” implies Time as not just Shakespeare but as the ultimate playwright. Combined with one of Autolycus roles as artist, we see many comments not so thinly veiled from Shakespeare directly to the audience. Scene ii focuses on Polixenes and Camillo, who has been serving the Bohemian King the past fifteen/sixteen years. While Camillo desires to return to Sicilia at the request of his “penitent king”, Polixines asks Camillo to help him gather some information about his son’s behavior. Both Camillo and Polixenes’ spies confirm Prince Florizel has been spending time with a girl of “rare note”, the daughter of a shepherd who has an estate beyond his station. The King proposes that he and Camillo disguise themselves to find out more about this mystery shepherd and his daughter. Polixenes’ behavior, denying Camillo his wish as well as spying on his son, hints at the same tyrannical behavior displayed by Leontes.

Scene iii introduces the wonderful character of Autolycus. He also presents a comparison with Leontes, but in this case Autolycus is the opposite of the King. Where Silicia presented the gloom of winter due to the King’s paranoia, Autolycus rejoices in the signs of spring and summer. Where Leontes viewed sex as a weapon to undermine his rule, Autolycus sings a celebration of “tumbling in the hay” with various doxies. Autolycus is a self-confessed rouge (a nice combination of the historical philosopher and his Homeric and Ovidian namesakes), wandering the countryside pilfering just what he needs to live on while entertaining himself and others with his ballads and trinkets. His exuberance stands in sharp contrast (and provides further relief) from the bleakness of Sicilia. We witness his cunning in picking the pocket of the gullibleand kind-hearted shepherd’s son. In a play relying on changing and uncertain identities, the con of the rogue claiming his robber was Autolycus adds comic irony. He leaves the scene claiming he will shear the sheepshearers, singing his way offstage.

Scene iv is wonderfully rich with the action revolving around the sheep shearing festival. A quick summary of the long scene: Perdita, the unknowing daughter of Leontes, is the hostess of the festival. We see her courtship with Florizel, the son of Polixenes and thus prince of Bohemia. Autolycus arrives and entertains the festival-goers (as a set-up for fleecing them). Polixenes and Camillo (both in disguise) converse with the young couple in order to find out more about Perdita. Once it is clear that Florizel intends to marry her, Polixenes reveals himself and commands his son to abandon seeing Perdita. Camillo, with Autolycus’ help, assists the young couple in escaping to Sicilia. The shepherd and his son, in order to clear their name as relatives to Perdita, plan to reveal to Polixnes that she was a foundling. Autolycus, always with an eye to making money, offers to assist them but instead arranges their passage on the ship carrying Camillo, Florizel, and Perdita to Sicilia. Thus we are set up for the final act when much will be resolved.

A quick summary doesn’t begin to convey the lushness of the pastoral scene and the joy that Autolycus brings to the play. Nature is far and away the focus of this scene. As hostess, Perdita plays Flora, an ancient goddess of fertility. She is Nature, distributing representative flowers to her guests. In addition, there are hints of eroticism hiding just beneath the surface. Whether Florizel’s opening line of “These your unusual weeds, to each part of you / Do give a life” (IV. iv. 1 – 2) or Autolycus’ indelicacies and double entendres (despite being billed as “not bawdry”), sensual joy is alive in the natural setting. Perdita’s discussion with a disguised Polixenes regarding art versus nature brings a few themes to the forefront. Polixenes begins by trying to associate Perdita with winter flowers:

Polixenes: Wherefore, gentle maiden,
Do you neglect them?

Perdita: For I have heard it said
There is an art which, in their piedness, shares
With great creating nature.

Polixenes: Say there be;
Yet nature is made better by no mean
But nature makes that mean: so, over that art,
Which makes you say adds to nature, is an art
That nature makes. You see, sweet maid, we marry
A gentle scion to the wildest stock,
And make conceive a bark of baser kind
By bud of nobler race. This is an art
Which does mend nature—change it rather—but
The art itself is nature.

Perdita: So it is.

Polixenes: Then make your garden rich in gillyvors,
And do not call them bastards.

Perdita: I’ll not put
The dibble in earth to set one slip of them;
Nor more than, were I painted, I would wish
This youth should say ‘twere well, and only thereafter
Desire to breed by me. (IV. iv. 85 – 103)

It sounds like Perdita is arguing for an unadulterated Nature that stands as its own art. There are several ironies here, not the least of which is Polixenes stating that gentle scions can be married to a wildest stock to make a nobler race, yet will not allow his son to continue seeing someone he judges as being of lower (wilder) stock. There are other comparisons and contrasts within he play that stand out in this act. Some of the more obvious items:

Once again, in a play of shifting identities this scene contains a lot of cloaking or masking. The festival goers get dressed up as someone else, in most cases above their station. In contrast, Florizel is dressed below his station so no one will recognize him as the prince. Polixenes and Camillo are in disguise to obtain more information about Perdita. Florizel and Autolycus switch clothing, which allows the rogue to appear as a courtier to the shepherd. However, with all these changes in clothing, the true nature of the person is not masked. Perdita is uncomfortable with dressing above her perceived station, even though her true nature is shown through her grace and manners. Autolycus, regardless of what he wears, is constantly on the lookout to separate someone from their money. 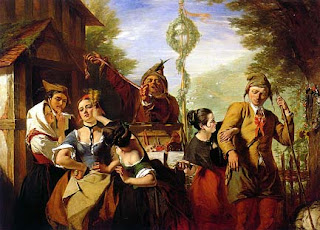 A Scene from "The Winter's Tale," 1845 by Augustus Leopold Egg
Picture source

The joy in this scene between Florizel and Perdita, as well as seeing Perdita’s nature, is almost overshadowed by Autolycus. Constantly shifting identities, you’re never quite sure which facet of the rogue you are going to see. A servant describes him one way, yet his actions are the opposite of his billing. He constantly lies about his ballads as well as his merchandise. His language changes with the situation, adapting easily whether he is appearing as a courtier to the shepherd or acting obsequious to his betters. He exudes a sensual joy of life and understanding of human nature, recognizing an “unjust man doth thrive” in the current situation and setting.

Shakespeare himself seems to appear throughout this scene, at times as Perdita or as Florizel, but mostly through Autolycus. Stealing sheets and turning them into ribbons or of cribbing ballads from others and presenting them as the his own work seems like a symbolic admission of the playwright’s own art. Taking others’ source material and changing it into something better is what Shakespeare did best. What we end up with is a marvelous scene that goes in many directions, yet focuses on personal views of the playwright's art and a joyous outlook on life. 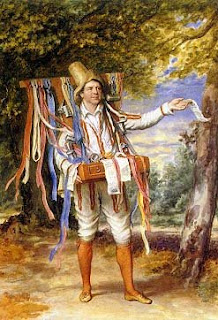 John Fawcett as Autolycus in "The Winter's Tale," 1828 by Thomas Charles Wageman
Picture source
Posted by Dwight at 10:52 PM