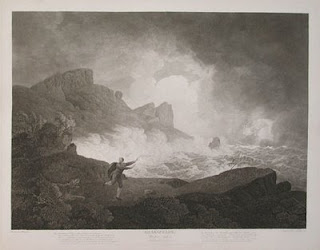 Scene i is very short, but packed with stylistic foreshadowing of things to come in addition to basic information of things that have happened offstage. The two lords sent to the Oracle in Act II Scene i have returned. Cleomenes and Dion describe their visit to the Oracle’s island, which sets up a sharp contrast to Sicilia. Words like “delicate,” “sweet,” and “fertile” are used in their praise of the island. The solemnity of the sacrifice they witnessed stands in sharp contrast to the sacrifice of Hermione’s baby (although the animal sacrificed to Apollo might beg to differ). Cleomenes recalls the Oracle’s voice, or more probably the noise heard when the Oracle heard the message from the gods, made him feel like he “was nothing.” While this echoes Leontes’ nihilistic ranting in Act I Scene ii, the contrast also stands out regarding the inward despair of Leontes versus Cleomenes' awe in the presence of god-related activity. An additional echo comes from Dion’s claim that the Oracle’s message hope that the message “Will clear or end the business” (line 18), recalling Leontes' command to take the baby to a place “Where chance may nurse or end it.” (II. iii. 182) The lords wish a favorable outcome for Hermione from the Oracle’s message, further showing that all is not well in Sicilia when the King's desire is being resisted (as Paulina showed in the previous scene).

Scene ii presents the trial of Hermione, with Leontes attempting to appear fair instead of tyrannical. The charges against the Queen are treason, adultery, and conspiring to kill the King. Hermione declares her innocence but since all she has is her word (which the King is predisposed to disbelieve), how can she adequately defend herself? She befriended Polixenes at Leontes’ request, which could not disobey. The threat of death is no longer a threat from her since she can no longer see her children and has clearly lost the love of her husband. Her language smoothly flows in a logical sense while Leontes' barbs are harsh and base. My favorite exchange is shortly before the Oracle’s message is read (III. Ii. 79 – 84):

Hermione: Sir, You speak a language that I understand not:
My life stands in the level of your dreams,
Which I’ll lay down.

Leontes: Your actions are my dreams.
You had a bastard by Polixenes,
And I but dream’d it!

Hermione’s life is at the mercy of Leontes’ fantasies and he stands reality and delusions on their head. Hermione prizes her honor before her life, but unfortunately Leontes feels the same way: he prizes his honor above her life, too. After eloquently defending herself, even though she knows it will not change the outcome, Hermione defers to the Oracle. (Reading Hermione's pleas alongside Imogen's passionate defense in Cymbeline, Act III Scene iv is educational in what is similar and what is different when taking into account their situations.)

The Oracle’s message is comically brief and unambiguous, unlike any pronouncement in ancient Greek literature:

“Hermione is chaste; Polixenes blameless; Camillo a true subject; Leontes a jealous tyrant; his innocent babe truly begotten; and the king shall live without an heir, if that which is lost be not found.”

The only ambiguous part is narrowing the intent of what is lost. One of my reactions in reading the Oracle’s message was obviously anachronistic—it sounded like a telegram: “Hermione is chaste, stop. Polixenes blameless, stop. Camillo a true subject, stop.” Leontes dismisses the message as false and vows to proceed with the trial. Retribution from the gods is swift, however. A messenger delivers the news that Mamillius, fearing his mother’s fate, died. Leontes, on hearing the news and seeing Hermione faint, realizes he has been unjust and the gods are punishing him. He provides for every care be taken with the prostate Queen, vowing to reconcile with her as well as Polixenes and Camillo. In realizing he sought revenge for his honor, he has stripped away the honor of others. Paulina returns after attending to the Queen and acts as Leontes’ conscience as well as abeting in the belief that Hermione has died. Also, Paulina provides some foreshadowing for the final Act regarding bringing Hermione back to life. The King’s 180° return to sanity is almost too rapid to be believed, mainly because his jealousy and paranoia were so strong. However, before the reader or theatergoer can raise any concerns, the location changes as well as the temperament of the play.

Scene iii shifts to Bohemia where the shocking action continues, complete with death and destruction, but the mood is noticeably changed to parody. There are other comparisons and contrasts with what has already happened, but the main effect is to stop grief or similar emotion in its tracks. Antigonus has arrived in Bohemia with the royal baby to complete his mission of abandoning it to the elements. He relays his dream seeing Hermione and her desire to name the baby Perdita. Since he believes he would not have seen Hermione in a dream without her being dead, and that she could not be dead without the Oracle’s message, Antigonus clearly believes in the Queen’s guilt. He abandons the baby to the elements (with gold and a scroll) and leaves the stage under the direction Exit, pursued by a bear. Whether or not the original production contained a bear or not (bears were not uncommon in plays of the time, not to mention there was a bear pit near the Globe Theatre), the trajectory (bearing?) of the play hinges on this scene as well as carrying symbolic value. A shepherd and his son enter. The son has seen Antigonus being devoured by the bear as well as his ship’s crew lost in a storm, which means that Leontes is irrevocably cut off from Perdita. After the shepherd finds the baby and the gold, he instructs his son to keep it a secret in order to maintain their good luck. Given the rapid shift in location and tone, the viewer is given fair warning that something different is in store for the reaminder of the play. 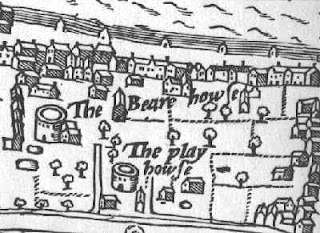