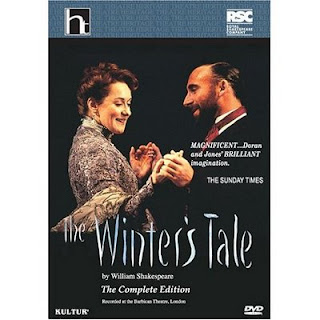 This production is a filmed stage production from the RSC’s 1998/99 season performed at the Barbican Theatre, London. The staging is mostly stark (with the pastoral scene as a notable exception), which allows the players' performances to be the central focus. Despite the minimal sets, some uses were rather innovative (for example the draped sheets had multiple applications).

Regarding most tragedies, I prefer them on the page over the stage (which obviously defeats the whole purpose). Many performances are bombastic and over-the–top even when faithful to the intent. Again, it’s not that they are doing anything wrong, it’s just not my penchant. The tragedy part of this play centers around Leontes and Hermione and fortunately the Antony Sher and Alexandra Gilbreath did extremely well in difficult roles. Gilbreath’s trial scene was powerful, and Sher handled the extreme swings in Leontes as well as possible—it reads as an almost impossible role to play. The lighting tends to be dark many times in the “tragedy portion,” adding a physical element to Leontes’ darkness of mind.

The comedy part of the play was outstanding. Christopher Brand steals almost every scene he is in as Clown, the shepherd’s son. And Ian Hughes as Autolycus was a delight…a rogue’s rogue. The direction of Gregory Doran and the design of Robert Jones, solid throughout, really shine in the fourth act. The only sour note for me was having Autolycus come out as a stereotypically comic Jew in the merchant role/scene. I’m the last person to be politically correct but this just rubbed me as unnecessary, reaching for a way-too-easy laugh (although not beyond what Shakespeare himself might have done).

Watching the play adds an appreciation for the different types of performances included in the play. The dances and songs require quite a versatile cast. At one point I thought I missed some of my favorite lines, but it turns out they weren’t performed. Based on just a spot check, I would guess that about 10 to 15% of the play was excised, a line or two cut here and there. The overall running time is listed at 170 minutes, so I understand the desire to keep the total time under three hours. Still, an additional 20 minutes doesn’t seem like it would have been unbearable.

Overall, I thought it was a solid and enjoyable performance—I definitely recommend it. Even though this is a tape of a theatrical performance, the camera isn’t static and provides close-ups which add depth (as well as makes you realize how much you can miss at a distance). I think the play will lend itself well to a movie adaptation and I have high hopes for the one currently listed for 2009.