The Winter’s Tale discussion: Act I 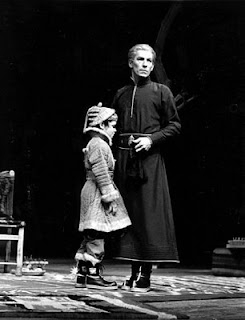 Scene i consists of two nobles, one each from Bohemia (Archidamus) and Sicilia (Camillo), providing the foreground of where the action currently lies. The long-standing friendship of their two kings, dating back to their childhood, is established as well as the young prince Mamillius’ promise as heir to the Sicilian throne. The inflated compliments between the two nobles are so exaggerated that the undermining of the succession claims in the last three lines sounds a rather flat note to set up Scene ii.

Scene ii is where the action begins, and it races ahead quickly. Polixenes (King of Bohemia) thanks Leontes (King of Sicilia) for hosting his long stay, but regrets that he needs to return to his kingdom. Polixenes is not persuaded by Leontes to remain a while longer, so Leontes enlists the aid of his wife, Hermione. She is able to convince Polixenes to stay, but their conversation has several interesting points. Polixenes rhapsodizes on the time he and Leontes spent as boys (I. ii. 67-75). While proclaiming their innocence as youths, there is a strong homoerotic tone in his speech. As usual with Shakespeare, it is difficult to be completely sure if it is there or if I am reading too much into it (although it would provide an additional reason for what unfolds). As Hermione chides Polixenes and questions the boys’ sexual experience before they met their wives, Leontes returns (and must have overheard some of their talk about sex). He finds out she has persuaded the King of Bohemia to stay, which marks the start of his descent into murderous sexual jealousy.

The cause of Leontes’ jealousy is not completely clear, or at least doesn't seem completely explained by what has transpired. But as Camillo states at the end of the scene when asked how this jealousy could have happened, “I know not: but I am sure ‘tis safer to / Avoid what’s grown than question how ‘tis born.” (I. ii. 432-433). At this point, how it happened is not as important as recognizing it is very real. Leontes’ words and actions turn caustic, congratulating his wife for her ability to win a man over for a second time, using acerbic words to describe their courtship (I. ii. 101-105). His language takes on additional layers of meaning as he comments on the innocent actions of his wife and Polixenes as well as the appearance of his son. The close proximity of the lines regarding the boys innocent play, their pre-marriage sexual experiences, and Leontes' courtship comments traces a revealing arc. The implication seems to be that innocence is sullied by sexual activity outside of marriage, followed by Leontes' powerlessness in courtship. The tables have already been turned once regarding sexual power, and his perceived subjugation again helps fuel his fire. While his anger and despair rise, his comments are veiled and much more subtle (around others, at least) than similar Shakespearean characters that believe themselves to be the cuckold (Othello and Posthumus most notably). Some of Leontes’ comments on cuckoldry are even comic (men “little thinks she has been sluic’d in ‘s absence / And his pond fish’d by his next neighbor” I. ii. 194-195) as he drives himself deeper into the abyss of his jealous madness.

The abyss doesn’t reach bottom any time soon as he grills Camillo on his wife’s fidelity, believing himself the last to find out. The intensity builds as he reaches his nihilistic conclusion:

Is whispering nothing?
Is leaning cheek to cheek? is meeting noses?
Kissing with inside lip? stopping the career
Of laughter with a sigh (a note infallible
Of breaking honesty)? horsing foot on foot?
Skulking in corners? wishing clocks more swift?
Hours, minutes? noon, midnight? and all eyes
Blind with the pin and web but theirs; theirs only.
That would unseen be wicked? is this nothing?
Why then the world and all that's in't is nothing.
The covering sky is nothing, Bohemia nothing,
My wife is nothing, nor nothing have these nothings,
If this be nothing. (I. ii. 284-296)

That there is nothing behind his fears does not matter at this point. Unsaid in this despair is that he fears himself ‘nothing’. Since there is only ‘nothing’, Leontes has free rein to do anything he pleases, disregarding his responsibilities as leader (and the belief of Shakespeare's time that the personal affects the state when it comes to leaders). The section at the end of the second scene with Leontes and Camillo is my favorite part of this act for several reasons: it shows that Leontes is mad (imagining Hermione’s unfaithfulness, ordering Camillo to kill Polixenes) but still manages a perverted lucidity of reasoning (promising not to hurt Hermione if Camillo does poison Polixenes). Camillo realizes he cannot win regardless of his actions, so his replies to the King are ambiguous. Does he actually promise to poison Polixenes or not? It is so wonderfully worded the reader/observer can’t tell.

In this section, as well as when Camillo warns Polixenes of the plot, there is the allusion to the breakdown of order, beginning at the top (which will cause things to be greater because of Leontes’ power) and how it will impact the rest of the kingdom. The scene and act ends with Polixenes agreeing to flee with Camillo’s guidance. The act is a wonderful set-up for what feels to be an updated Greek tragedy.