The Campaigns of Alexander summary 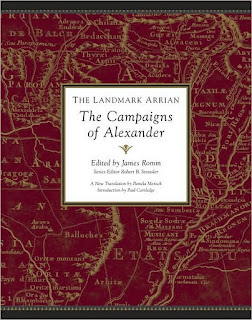 If you haven’t noticed by now, I am a huge fan of the Landmark series, created by Robert B. Strassler. If you haven’t picked up a volume in the series, check out these sample pages from various parts of The Landmark Arrian: The Campaigns of Alexander. The introduction by Paul Cartledge provides an excellent introduction, especially with his focus on the sources. The appendices, many by editor James Romm, provide context for various aspects of Arrian’s work and Alexander’s time.

Arrian’s work covers Alexander III of Macedon’s reign from his ascension to the throne until his death in Babylon in 323 BC. This twelve-year reign saw remarkable achievements that earned him the moniker “the Great.” Arrian wrote almost five hundred years after Alexander’s reign, his admiring portrait (with an occasional finger wag) meant to be “for the benefit of mankind.” His task was all the harder because it is almost impossible to discover the historical Alexander—the propaganda and myth-making began during his reign with his own appointed historian. Arrian spells out his approach to his subject and his book in his two prologues, both of which provide an important framework to keep in mind when reading and assessing the work.

As I noted early in Arrian’s work, the reading of Alexander’s life would be a study in contrasts and that carried through to his death. Because of the many facets of Alexander’s life he could be a poster child for the adage that each generation writes its own history—depending on which side you emphasize you get a very different portrait. Arrian, to his credit, focuses on Alexander the person (most of the time), a complex man taking every advantage of what was provided and overcoming what wasn’t. A. B. Bosworth’s comment that “The study of Alexander…is in large part the study of Arrian, who provides the constant thread against which the rest of the tradition must be assessed” shows how influential Arrian has become in evaluating the ruler. (From Arrian to Alexander: Studies in Historical Interpretation. New York, Clarendon Press of Oxford University Press, 1988). In addition to being a history, Arrian’s work has to be evaluated as a literary work. For example, the speeches provide Arrian with an opportunity to “invent” the Alexander he wants his readers to see, following in the footsteps of Herodotus and Thucydides (among others) in using this rhetorical device in their histories.

The following links will give you a flavor for the book, which I hope anyone with even just a passing interest will explore. Highest recommendation.

Resources
Online resources
A series of weekly conversations between historians James Romm and Paul A. Cartledge at Forbes.com
The link to Reading Odyssey, Inc., which hosted a reading group of the book
A mini-review of James Romm’s Ghost on the Throne: The Death of Alexander the Great and the War for Crown and Empire
The Reading Odyssey's 2011 conference calls on the book

Book Two
He firmly refused to suspect his friends and had the strength to face death
Leadership and legend
Address yourself to me as the king of Asia
Siege, wrath, and amnesty
A look at Arrian in his text (so far)
Destiny

Book Three
The oracle of Ammon
Alexander, the great administrator?
Gaugamela
Burning down the house

Book Seven
Be gone, all of you!
Consider who you are in comparison to Alexander
For the benefit of mankind

Miscellaneous
Clips from the 1968 TV movie “Alexander the Great”, filmed in 1964 and starring William Shatner as Alexander and Adam West as Cleander
Excerpt from Robert Lowell’s "Death of Alexander"

Map of the Macedonian Empire under Alexander and his journeys
Picture source
Posted by Dwight at 10:32 AM

Email ThisBlogThis!Share to TwitterShare to FacebookShare to Pinterest
Labels: Arrian, Biography, The Campaigns of Alexander

Dwight, I am blown away by the amount of terrific information that you've included in this posting. I love military history, and a lot of this stuff looks it is in my wheelhouse.

A few years ago I discovered the historical fiction of Stephen Pressfield, and he has an affinity for writing about the military history of the ancient Greeks. In fact, I sent his The Afghan Campaign to my son when he was stationed in Kanadahar with his Army unit. Apparently, when he finished it, it was passed around to half-a-dozen other soldiers. They all loved it.

I plan to spend a lot of time browsing through your postings on your blog. Have a great weekend. Cheers! Chris

Christopher...welcome, good to see you. And thanks for the recommendation of Pressfield's books. I've seen several historians speak highly of them so I definitely want to check them out (plus it's a great idea for my next Soldiers' Angels package).

If you haven't explored any of the Landmark books yet, I highly recommend them. The maps on the battles in Arrian are the best yet (although some of that comes from his having the best descriptions of battles in the series to date). Hope you enjoy poking around here!