Arrian: Book Two—address yourself to me as the king of Asia 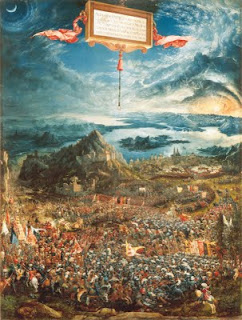 Battle of Issus, Albrecht Altdorfer
Picture source
(be sure to click on picture for more detail)

All quotes are from The Landmark Arrian: The Campaigns of Alexander, translation by Pamela Mensch.

In the previous post I mentioned Alexander undoing the Gordion (Gordian) knot as part of the myth-building process. What I didn’t mention was the legend that went with the knot: “The legend of the wagon also included a prophecy: the man who undid the knot of the wagon’s yoke was destined to rule over Asia.” (2.3.6) I’m sure the legend’s message did not escape Alexander. He has already defeated the Persian army at the Granicus River and he knows that Darius leads an army to face him soon. If he intends to be called the king of Asia, he needs all the credibility he can get.

After the victory at Issus, which included the capture of several members of Darius’ family, an exchange of letters takes place between the two kings. Darius writes first, requesting the return of his family members. He stresses the friendly relationship Persia has had in the past with Macedonia but first Philip and now Alexander pursue unwarranted hostilities toward the Persians. Darius claims he has only acted in defense of his country and, accordingly, was willing to form an alliance with Alexander. (2.14.2-3) The footnote for this passage notes the various versions of Darius’ letter, “contaminated by a fictional collection of Alexander-Darius correspondence that circulated widely in antiquity”, so we’ll just have to go with Arrian’s version of events and letters. The possibility of Alexander providing an alternate letter from Darius to advance his agenda implies a cunning control of events and sentiment, something not beyond Alexander's capabilities, even at this young age.

Alexander’s response makes many charges against Darius and Persia, most of them specious (2.14.4-6). What I’m more interested in is the second half of the letter—Alexander’s claim to be king of Asia:

”Now that I have prevailed in battle—over your generals and satraps earlier, and now over you and your own forces—and the gods have given me possession of the country, I am also responsible for all the men who fought on your side, survived the battle, and fled to me, and who remain with me not unwillingly, but have joined my campaign voluntarily. So regard me as master of all of Asia and come into my presence; if you fear you may suffer some harm at my hands, send some of your friends to receive pledges. Approach me and ask for your mother, wife, children, and anything else you like, and receive them; anything you persuade me to give will be yours. And in future, whenever you send word to me, address yourself to me as the king of Asia and not as an equal, and let me know, as the master of all that was yours, if you have need of anything. Otherwise, I plan to deal with you as a criminal. But if you contest the kingship, hold your ground, fight for it, and do not flee, since I am coming after you wherever you are.” (2.14.7-9)

It’s an arrogant letter, but I wonder if the last point underlies much of that haughtiness. It is difficult to imagine Alexander fleeing from a battle like Darius did from Issus. With the defeat of Darius, Alexander wastes no time claiming the title of king of Asia and demands to be addressed this way in future correspondence. Alexander claim for supremacy over Asia wasn’t just made up on the spot—this was an essential goal of his campaign that he makes clear in other settings. When calming Darius’ family and promising their chivalrous treatment, Alexander asserts his “war against Darius had not sprung from enmity but was a lawful struggle for the sovereignty of Asia.” (2.12.5) Later, when informed Tyre would like to remain neutral, Alexander lays out the campaign plans and how the coastal cities (and other areas) fit in with his desire to attack Babylon and be ruler of Asia. (2.17.1-4)

Whatever the attitude behind writing the letter, Alexander makes his point clear since Darius’ next letter recognizes he’s not dealing with just any twenty-three/twenty-four year old. Darius offers Alexander ten thousand talents for the return of his family, proposes to cede territory from the Euphrates River to the Aegean Sea, agrees to give his daughter in marriage to Alexander, and renews the offer of an alliance. Upon hearing the terms of the letter, Parmenion, once again the literary foil, says that “if he were Alexander he would be content, on those terms, to end the war and run no further risks. Alexander replied that if he were Parmenion, he would do likewise, but since he was Alexander” he would reply differently. (2.25.1-2)

Alexander’s reply was as haughty as the first one, saying

he had no need of Darius’ money nor of any part of the country instead of the whole, since the money and the entire country were his. And he would marry Darius’ daughter if he wished to; he would marry her even if Darius failed to offer her. He urged Darius to come to him in person if he wished to be treated generously. (2.25.3)

Darius realizes there will be no bargaining with Alexander—it’s either submit or fight and Darius chooses to prepares for battle. I find Alexander’s stance remarkable, even taking into account all he has accomplished up to this point. And as we’ll see as the campaigns unfold, his confidence in claiming to be master of Asia proves to be well founded.

The Family of Darius before Alexander, Paolo Veronese
Picture source
Posted by Dwight at 10:41 AM

The demand to be addressed as the king of Asia reminds me of George Washington’s refusal to accept correspondence from the British during the Revolutionary War that did not address him using his official title—I wonder if Alexander's example was part of that inspiration.

It also makes me wonder how Darius addressed the second letter...