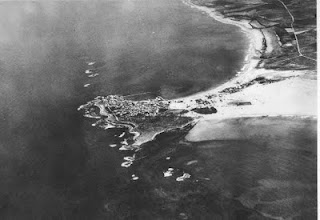 Aerial photo of Tyre, 1934
Picture source
The mole that Alexander had built out to the city has silted up over time

All quotes are from The Landmark Arrian: The Campaigns of Alexander, translation by Pamela Mensch.

I didn’t spend much time talking about the battle of Issus but I do need to recommend The Landmark Arrian for making such battles easy to understand since it employs helpful battle maps showing detailed movements. I did want to spend some time on the two sieges in this book, Tyre and Gaza, and some of the meanings and implications from these campaigns. As Alexander marched south toward Egypt he requested from officials in Tyre entrance in order to sacrifice to Herakles at their ancient temple. Tyre, wishing to avoid choosing sides at this point, said they would receive no Persian or Macedonian in the city and would remain neutral. Alexander says this is unacceptable in a brilliant speech that lays out his plans and explains the reasoning why neutrality is not a choice:

”Friends and allies, I see it will not be safe for us to march against Egypt while the Persians control the sea. And for us to leave Tyre behind, its loyalty dubious, to pursue Darius while Egypt and Cyprus remain in the hands of the Persians would be unsafe for any number of reasons, but particularly when one considers the state of affairs in Greece. For if the Persians regain control of the coast while we proceed with our forces against Babylon and Darius, they might, by sending out a larger force, shift the war to Greece, where the Spartans are openly at war with us and our control of Athens is currently founded more on fear than on goodwill. But with Tyre demolished, all of Phoenicia would be in our hands, and the largest and strongest contingent of the Persian navy, namely the Phoenician, would likely come over to us; for the Phoenician oarsmen and marines will not consent to run risks at sea on others’ behalf while their cities are under our control. Thereupon Cyprus will either join us willingly or be taken easily in a naval attack. And if we put fleets from Macedonia and Phoenicia into action, and Cyprus joins us as well, our mastery of the sea would be secure, and hence our expedition to Egypt would be easy. And once we have won control of Egypt, we will have no reason to be concerned about Greece or our own home. Secure at home, our renown increased, we will march against Babylon, having cut the Persians off from the sea completely and from all the territory this side of the Euphrates. (2.17.1-4)

It’s a long speech to quote and who knows it was actually delivered, but it provides a blueprint of Alexander’s intentions in addition to meshing well with his results. The Phoenician navy, seeing their homes fall to Alexander, joined Alexander’s forces at Tyre and contributed siege technology as well as ships. Tyre was a city island a half-mile from shore so Alexander ordered a mole built out to the city. Although the mole helped provide some assistance in taking the city, it played a minor role in the final fall of the city as the navies fought for access to the city. (Just to make it clear, the mole did help accelerate the showdown between the navies.) Note 2.21.1a fleshes out Arrian’s narrative on what the Phoenicians provided Alexander:

Diodorus…goes into more detail regarding the technological innovations introduced by both sides during this siege. … Phoenicians were famous in antiquity for their engineering skill, so it is not surprising that Alexander recruited much of the local talent into his army or that both sides in the conflict made rapid advances in military technology over the course of the seven-month siege.

The Greeks seem to have been slow in developing siege techniques and tactics—the sieges described in Thucydides were usually very long, drawn-out affairs that proved successful as often as not. But I found this siege narrative exciting to read as both sides traded effective blows, forcing each other to improvise or develop the new technology. Eventually Alexander’s forces prevail and, of course, he is in the thick of things as the city wall is breeched and his troops pour in to capture the town. As I have mentioned earlier, Alexander seems to regard the need for a siege as a personal affront and the cities he takes this way do not fare well:

The slaughter was great, now that those advancing from the harbor were already in control of the town and Koinos’ battalion had entered it as well. The Macedonians advanced, most of them in a rage: they were vexed at the delay caused by the siege, and because the Tyrians had earlier seized some of their men sailing from Sidon, the Macedonians made them mount the wall so they might be seen from the army’s encampment, and cut their throats and flung their bodies into the sea. (2.24-3)

Alexander did grant amnesty to those who fled to the shrine of Herakles. Arrian estimates eight thousand Tyrian dead and thirty thousand enslaved as compared to four hundred Macedonian deaths (during the actual fighting—he implies others died during siege tactics). Of further interest is what Arrian leaves out: Diodorus claims all Tyrian military-age men, at least two thousand, were crucified on the mainland beach. Quintus Curtius’ account backs the crucifixion claim, too, although I’m not sure he provides a number. The scale of this atrocity is dumbfounding and Arrian’s silence is revealing. Alexander’s actions swing wildly from viciousness to chivalrous but he wasn’t the only one committing atrocities. Darius had tortured and killed the invalids that Alexander left behind before the battle of Issus (2.7.1), while Quintus Curtius’ account reports worse atrocities by the Persian king.

As the march to Egypt resumes, the only city that attempts to hold out is Gaza. Alexander uses the technology learned and siege-engines constructed for the siege of Tyre at Gaza to take the city in a more efficient manner. All the men of Gaza that resisted were killed while the women and children were enslaved. Alexander resettles the city and will move on to Egypt in Book Three.

As I mentioned in this post, Alexander has been fairly consistent in rewarding friends and punishing enemies, reserving his harshest treatment for turncoats but there are exceptions in Book Two. Alexander’s gallant treatment of Darius’ family provides the obvious example and seems fairly clear-cut—keeping them as hostages would accelerate Darius’ capitulation or insure another direct conflict before too long. Another exception can be easy to miss so I wanted to highlight it. Greek envoys sent to Darius’ court before the battle of Issus are captured and sent to Alexander. Alexander’s behavior stands in marked contrast (for the most part) to how he treats other Greeks allied with Darius:

When they arrived, Alexander immediately released Thessaliskos and Dionysodorous, though they were Thebans, in part out of a certain compassion for Thebes, and in part because they appeared to have acted pardonably; for when their country had been enslaved by Macedonians, they had looked for any help they could find, for both their homeland and themselves, from Darius and the Persians. Alexander was therefore favorably disposed to both men, though he said he was releasing them for individual reasons: Thessaliskos out of respect for his family (who belonged to Theban nobility), Dionysodoros on account of his victory at Olympia. As for Iphikrates, while he lived Alexander kept him at court out of friendship for the city of Athens and in memory of the man’s father [who helped place Alexander’s family on the throne in Macedonia], and when he died of disease Alexander sent his bones back to relatives in Athens. Euthykles, on the other hand, was a Spartan, and since Alexander harbored a pronounced hostility toward Sparta at the time, and could find no substantial reason for a pardon based on personal record, he at first put Euthykles under guard, though without shackling him. Later, however, when Alexander achieved considerable success, he released Euthykles as well. (2.15.3-5)

For Alexander, victory brings slaughter/enslavement or compassion…there rarely seems anything in between at this point. Arrian seems keen on highlighting the gallant actions. While he doesn’t soften much of the body-count that piles up behind Alexander, his exclusion of certain actions, such as the crucifixions at Tyre, seems to demonstrate Arrian intent on shaping Alexander’s legacy as positively as possible. I’ll have at least one more post on Book Two next week that looks at a little bit of Arrian’s techniques and style. A second possible post would be on the theme of destiny running through Alexander’s campaign. 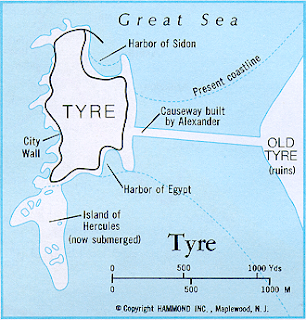 The siege of Tyre
Picture source
Posted by Dwight at 11:14 AM

Warfare is a fascinating subject. Despite the dubious morality of using violence to achieve personal or political aims. It remains that conflict has been used to do just that throughout recorded history.

Your article is very well done, a good read.