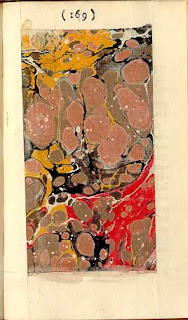 One of the unique marbled pages from Volume III
Picture source

In which I bid a fond farewell to the Shandy clan. When putting a book back on the bookshelf or returning it to the library I usually don't consciously think whether I'll revisit it again. So where does Tristram Shandy fall? "For those who haven't heard of it, it was actually listed as number eight on the Observer's top 100 books of all time." (A line from the movie, to which the reply "That was a chronological list" sails right over his head.)  I loved this book and have found myself returning to parts of it. One of the best things about the book is that you can dip into it almost anywhere for whatever length of time (or pages) and thoroughly enjoy the wade.

Meanwhile, here are the posts associated with the book:

At the end of each post discussing a volume, I've included an index of chapters. I did this to assist me in finding a particular chapter or passage, but feel free to use them (at your own risk). I have tried to keep my citations consistent with these indexes--Roman numerals for the volume, Arabic numerals for the chapters.


How far my pen has been fatigued like those of other travellers, in this journey of it, over so barren a track--the world must judge--but the traces of it, which are now all set o' vibrating together this moment, tell me 'tis the most fruitful and busy period of my life; for as I had made no convention with my man with the gun as to time--by stopping and talking to every soul I met who was not in a full trot--joining all parties before me--waiting for every soul behind--hailing all those who were coming through cross roads--arresting all kinds of beggars, pilgrims, fiddlers, fryars--not passing by a woman in a mulberry-tree without commending her legs, and tempting her into conversation with a pinch of snuff--In short, by seizing every handle, of what size or shape soever, which chance held out to me in this journey--I turn my plain into a city..."
-- Volume VII, Chapter 43

"(I)n using the stick, every one will take the handle which suits his convenience. In Tristram Shandy, the handle is taken which suits their passions, their ignorance or sensibility."
-- 1768 letter from Sterne to Dr. John Eustace