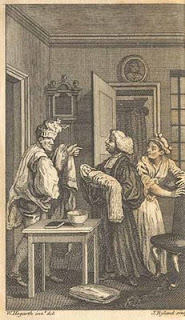 I do not fear the opinions of the ignorant mob, but I ask that they spare my little book, in which I always proposed to pass from the mirthful to the serious, and from the serious to the mirthful again.”
--epigraph to Volumes III and IV (from John of Salisbury, bishop of Chartres, and adapted by Sterne)

The tale continues in the same slow, circuitous manner, with plenty of digressions on many topics. At some point the reader realizes that the emphasis is on the journey for both the life and the book, not on reaching an end to either. Sterne mentions again that laughter is his goal and devotes a chapter (IV 22) to explain why. Even though every claim in the book needs to be viewed with a skeptical eye, this goal seems real given the content and style he uses.

Many recent books I have covered dealt with time in some manner and Tristram Shandy does as well. In talking about actor David Garrick, Tristram highlights Garrick’s acting style and the amount of time needed for the scene. While emphasizing the difference between time on the clock and the action covered, Sterne broaches the topic of “clock time” and “life time.” The comparison to Sterne’s writing style is implicit as Tristram analyzes the pauses and other acting tricks Garrick uses to delay his delivery. The relation is much more explicit in Volume IV, Chapter 13 where Tristram notes the dual nature of his life: he lived it initially and he is re-living it in the telling of it. This and the different types of time tie nicely into the previously mentioned “writing as life” theme throughout the book. The “more I write, the more I shall have to write” is Tristram’s attempt to stave off death by continually writing about his life. Tristram even states the relationship at one point: “Being determined as long as I live or write (which in my case means the same thing)”.

The narration style begins to blur the line between Tristram and Sterne in this section. Tristram notes in the early chapters of the book that he got the information being relayed from his Uncle Toby, but there are several times where the wording slips into a third person omniscient voice or includes facts that Toby could not have possibly known. The blurring continues with the inclusion of several of Sterne’s sermons (abridged or paraphrased) as well as letting Tristram address the critics for him. Tristram even suffers from the same health problems as Sterne (“this vile cough”). This blurring is done with such a light hand that it seems unimportant to delve into who is speaking—Tristram is, of course. And if it happens to echo Sterne, so be it. One of the humorous motifs comes from Tristram continually laying out how he will tell the story. Sometimes he sticks to his plans, oftentimes not. He constantly lists subjects he would love to cover (and how many chapters he would devote to them), then goes off on another digression. Chapter 24 in Volume IV has been deleted, even though Tristram later tells you what was in it and why he deleted it (the chapter was done so well it would have made the rest of the book look bad).

The humor continues unabated in this section as well. As everything continues to conspire against Walter and his son, characters are never slow to blame Fortune and Fate instead of looking at the preceding actions. That many of the difficulties happen to be aimed at Walter’s hobby-horses (noses, names, hinges, etc.) makes the growing strife that much funnier. The double entendres and suggestive word choice persists, but at this point Tristram notes that if anything appears bawdy it is all in the reader’s mind (III 31). “To define is to distrust” we are told, yet Tristram defines the word “nose” so that the upcoming discussion on Walter’s hobby-horse about noses and the tale from Slawkenbergius will not seem lewd. Yet by planting that seed the hobby-horse and the tale cannot be read innocently. The frequent hints at castration and cuckoldry continues as well, usually veiled in words with double meanings but sometimes openly as in the Shandy coat of arms on the carriage.

The characters are developed more as we find out more about them. Many parts of Toby and Walter seem pulled directly from characters in Don Quixote. Toby is a major reason I look forward to the rest of the book. Walter’s unique way of reasoning (pointed out several times by Tristram, although it isn’t really necessary to assist the reader) and his stubbornness in clinging to his ideas once formed make him a loveable character despite himself.

Sterne also gets back to Locke several times. I mentioned in the first post that Sterne sometimes agreed with Locke, sometimes critiqued him. I now think “critique” is too strong a word for his disagreements. Direct associations with Locke in just Volume III can be found in Chapter 18 (succession of ideas), Chapter 20 (disagreement with Locke’s thoughts regarding the interaction of wit and judgment), Chapter 31 (exactness and precision), and Chapter 40 (linking of ideas, as well as wishing Locke could view Walter and Toby’s discussion). While other works and authors are mentioned or alluded to in these volumes, Locke holds center stage for much of the time.

There are two additional themes or motifs I want to keep in mind for the rest of the work to see if they are developed more. First is the feeling of conversation as a song. Many terms used in describing a character’s speech have a musical meaning: tone, pitch, chord, third, fifth, etc. There are “duets” at times with two speakers talking at the same time (or even one talking while the other whistles). The second theme is the head/heart differences. Yorick destroys his sermon because it came from his head instead of his heart. However, in describing why he cannot translate the next tale by Slawkenbergius, Tristram admits that the story spoke directly to his heart while “(t)he brain made no acknowledgment.” The key for Sterne in other areas seems to be balance, so we'll see if that is his resolution to the problem. I’m interested to see if either of these themes is addressed further in the last half of the book.

If it were possible to sum up this section in one sentence, Tristram advances a likely candidate (when talking about Phutatorius' burn): “It is curious to observe the triumph of slight incidents over the mind.” 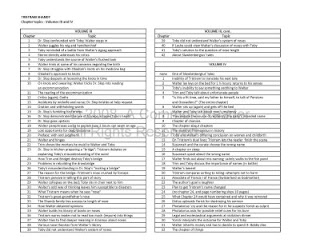