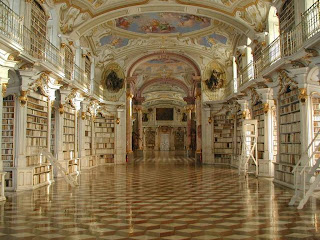 Library of the Benedictine Monastery of Admont, Austria
Librophiliac Love Letter: A Compendium of Beautiful Libraries

Posted over a year ago but I just discovered it this week. I’m still working my way through all the pictures of these gorgeous libraries (and will have to pace myself to work through the site). How to explain the frisson each image brings?


Analyzing The Best Game Ever

As someone who grew up studying pro football almanacs (I loved the three-deep charts they would show for each position) and updated my Gatorade cap standings board each week of the season, I enjoyed reading Mark Bowden’s viewing of the 1958 Championship game between the Colts and the Giants with Eagles coach Andy Reid. Bowden is the author of The Best Game Ever

“The thing you’d tell Johnny [Unitas] right here,” Reid said, “is to take your best mismatch. You put T.O. [former Eagle, now Cowboys receiver, Terrell Owens, a noted deep threat] here and just picture him running a post over the top of that guy [Crow].” Sure enough, several plays later, the Colts exploited the formation, zeroing in on the most obvious mismatch by sending the speedy Moore racing down the right side of the field one-on-one with Crow. Unitas heaved the ball for a 60-yard gain.
Reid was impressed with Moore’s speed and hands; less so with his blocking. On a later play, when Moore lined up in the backfield, Reid laughed and rolled the film back. “Watch this,” he said. The ball is snapped and Unitas is eventually brought down by the Giants’ defense, while Moore simply stays put in the same stance he was in before the snap of the ball. In slow motion, his statue-like pose is comical. On a later play where Unitas was sacked, Reid again laughed and pointed to Moore missing an assignment. “Lenny didn’t help, picking his nose right there, man. That’s pissing me off.” Then, on another play, “Lenny needs his ass whipped a little bit right here.”

(In the Hall of Famer’s defense, his back was injured early in the game when Huff picked him up and slammed him into the ground. Moore nearly came out after that, but Ewbank urged him to continue playing, if only as a decoy, because the Giants’ defense was keying on him.)

Excuse me while I see if Diner is airing somewhere…


A short interview with Umberto Eco

INTERVIEWER
Do you think you might have actually enjoyed living in the Middle Ages?

ECO
Well if I did, at my age, I’d already be dead. I suspect that if I lived in the Middle Ages my feelings about the period would be dramatically different. I’d rather just imagine it.


Opera (and more) on the web

Podcasts courtesy of the Royal Opera House in London. They will be airing Mozart’s Don Giovanni starting October 5th. Their site looks to be a good resource for opera and other performing arts. 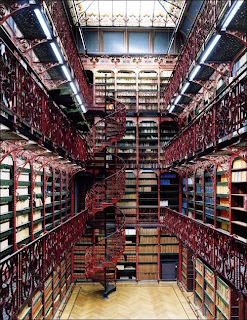