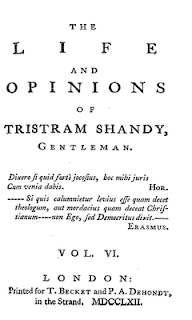 I think I’ll go with the shortened name of The Life and Opinions of Tristram Shandy, Gentleman. The long title is the reader’s first clue that nothing in the novel will be to the point. Here are some links on the work and the author:

Wikipedia’s entry on the author

The Shandean is “an international scholarly journal for the critical and historical investigation of all aspects of the work and life of Laurence Sterne.” Not much of the journal is available online beyond issue contents, but it will be interesting to see what is planned for The Tercentenary (of Sterne’s birth) Conference in 2013.

Laurence Sterne in Cyberspace, a collection of many site about Sterne and his works. The links to The Tristram Shandy Web (at The IULM University) don’t always work, but you can access that site directly by clicking here.

An article about Sterne at Jesus College, University of Cambridge where he attended starting in 1733. “He detested the curriculum he had to study at Cambridge, especially mathematics and logic, but he read with enthusiasm the ancient and modern literary classics.”

Wikipedia’s entry on the book

Links for the text at Project Gutenberg

HTML text site--harder to read, but it captures the quirkiness and originality of the text

The Glasgow University Library has pictures from early editions of the various volumes plus interesting facts about the book. “To protect his book from piracy, Sterne autographed the beginning of the first and second editions of volume 5 and the first editions of volumes 7 and 9: hence we find the author's signature in our copies of volumes 7 and 9. It has been estimated that Sterne had to sign his name an incredible 12,750 times to achieve this.” I can’t argue with one of their conclusions: “Such peculiarities draw attention to the appearance of the page and highlight the novel's lack of conventional form; indeed, although written in a conversational style, the enjoyment of the book very much depends upon the reader experiencing it as a physical object.”

Update: William Michaelian sent an additional site that is a project by Thomas Steele--original commentary in addition to helpful links.

Thanks very much for linking to my poem, “Reading Tristram Shandy.” I’ve just added a link to A Common Reader to the list of links on my blog, Recently Banned Literature. Interesting page.