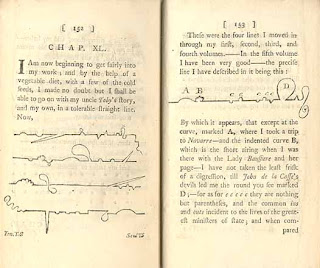 If I should speak too jocosely, this bit of liberty you will indulgently grant me - Horace

If anyone should censure [me] as too light for a proper churchman or too biting for a decent Christian, it is not I but Democritus who speaks (Latin) - Erasmus
-- epigraphs to Volumes V and VI


Volumes V and VI has been my least favorite section so far, even though there are some hilarious moments and brilliant ideas. I don’t know if the digressions are taking a toll on my attention span (especially the discussion on radical heat and radical moisture) or if these volumes aren’t quite as consistent as the first four. I’m sure reading these as they were released, several years apart from the others, would make a huge difference. That being said, I’ll touch on the parts I did like.

The novel’s self-conscious interaction with the reader is endearing most of the time. There are many sections where Sterne/Tristram leaves blanks/asterisks/dashes for the reader to fill in, but none as direct as Chapter 38 in Volume VI, where Tristram asks the reader to draw the widow Wadman (“as like your mistress as you can—as unlike your wife as your conscience will let you”) on the blank page that follows. The blurring between Tristram and Sterne breaks down, however, when Sterne addresses his critics. I liked the light touches of the epigraphs and other small asides, but the heavy-handed response to plagiarism charges turned me off. While most of the time his approach is light-hearted, the notice of Bobby’s death immediately following an extended defense doesn’t seem accidental. Maybe Sterne deliberately set to sour the mood in response? The story of Lieutenant Le Fever’s death seems to be compounding sentimentality in this section.

Tristram addresses his approach to writing his life and opinions, mostly claiming that the writing controls him and not the reverse: “(W)hy do I mention it?—Ask my pen,--it governs me,--I govern it not.” While recognizing that his family was unique and provided the source for great drama, he continually defends his approach in the way he tells his tale (while still questioning why he broached a subject too many pages in advance). While trying to graphically show how he has told his tale through the different volumes, Sterne reiterates that it is the journey (of the story, of life) that is important and not reaching the end (and/or delaying it as long as possible). His graphic representations (shown in the picture above) depicts anything but a straight line. Then vowing to attempt a straight line, he immediately goes off on another digression. The blank page and the squiggles at the end of Volume VI got my interest back after a long lull: “(H)ow it has come to pass, that your men of wit and genius have all along confounded this line, with the line of Gravitation.”

Conversation as music, a motif I wanted to keep an eye on, appears throughout this section. Toby seems to be the character that reflects this the most. He hums while reading the note of Bobby’s death, his voice vibrates like a note when speaking, or he modulates his voice to reflect a more serious note. In addition, there is an extended section describing Yorick’s sermons, giving them musical terms to describe their contents and/or how they are to be read. Also, Sterne takes a break at one point to mimic playing a fiddle as an interlude between chapters. I'm not sure why this interests me so much other than Sterne is very explicit about music as a form of communication.

In addition to enjoying the last few chapters of Volume VI, there are two additional things in this section that stood out for me. The first is Tristram’s accidental circumcision, an easy way to evoke laughter (and cringing), but it is done very well with double entendres, hints and allusions to set up the improbable chain of events. “Susannah did not consider that nothing was well hung in our family” indeed. The response of all the characters, especially Trim who did not let Susannah take the blame for the accident (and so soon after his dramatic expounding on life and death for the servants), is fun to watch. They each go off in various directions, spreading discord and misunderstanding everywhere. That Walter takes the news the calmest of all the characters reveals a strength only parodied elsewhere.

The second item I enjoyed is Walter’s Tristrapædia, a convoluted system of education he intends to use to educate Tristram. Like the rest of Walter’s reasoning (“My father, who saw all things in lights different from the rest of the world” is an understatement, and one that Tristram constantly repeats), the system is so convoluted that it defies practicality. Indeed, he is taking so long in laying out the system that Tristram is growing faster than Walter can complete it. With this, the reader gets another example of the dual time regarding writing and life. Walter’s own approach to education is humorously looked at when he tries to decide whether or not Tristram should wear breeches. He consults books on archaic garb, finding little to sway him one way or the other, when it could have easily been resolved by consulting a tailor. At this point, Tristram's constant moaning about Fate and Fortune makes perfect sense.

Some of the previous themes and motifs carry through this section. Walter’s and Elizabeth’s “beds of justice”, coinciding with the same night during the month where Tristram was allegedly conceived, shows Elizabeth always agreeing with Walter. Walter’s possible cuckoldry is occasionally mentioned as well: “I can not … imagine, quoth my father, who the duce he takes after” is explored regarding several features. Previous works alluded to continue, with Locke's association of ideas fully transformed into Sterne's rhetorical style. Robert Burton's The Anatomy of Melancholy, a tongue-in-cheek work that some critics were probably saying Sterne plagiarized, lies beneath the surface to a lot of topics and digressions.

But what stands out in Volume VI is Tristram declaring that he is changing the focus of his book to Uncle Toby. We get a better picture of how absorbed Toby is in his hobby-horse, his own little world. By definition, Toby lives in the past, relying on the newspaper for his advancing sieges or battles. When the war ends, he is lost…maybe not so much as looking for something now to fill his time but maybe because he has to face the present. His hope for the future is another war so he can lose himself in his world of recreations. Despite Tristram’s constant declarations and examples of how gentle Uncle Toby is, his inability to live outside his self-created world makes for a sad character. Offsetting this sadness is the wonderful relationship he has with Trim (and Walter as well). Their friendship is explored more in Volumes V and VI, much to its benefit. And I hope it is delved into more during the remainder. 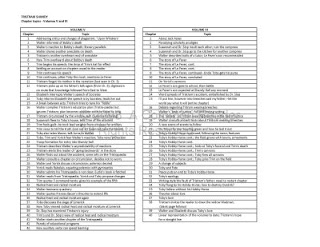