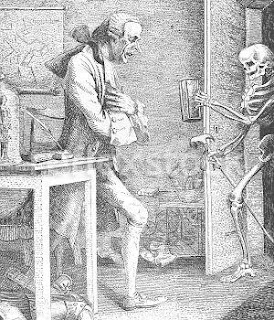 "This is not a digression from it, but the work itself" -- Pliny the Younger (epigraph to Volumes VII and VIII)

If I have joked too facetiously with anything, by the muses and the graces and all the power of the poets, I beseech thee not to mistake me" -- Julius Caesar Scaliger (epigraph to Volume IX)

Many times when I finish a book I want to skip writing about it--I’m so “done” with it and feel I’ve lived with it long enough and want to move on to another work. That hasn’t been the feeling with Tristram Shandy. The book is enjoyable up to the last pages and the last three volumes are by far my favorite. The difficulty is choosing how to write about them, so I guess I’ll go straight (or as straight as Sterne does) through them.

Volume VII starts with Death visiting Tristram (mid-joke), so he flees by traveling to France. For a book that ties writing and life as well as promotes “life as a journey”, this volume pulls the themes together. As with the rest of the book, this parody of travel writing becomes one large digression. Tristram would rather describe the innkeeper’s daughter than the buildings and other architecture he sees, even if the buildings fare better with time. This volume contains some wonderful digressive stories, such as Amandus and Amanda and the ending chapter where Tristram carouses with Nannette. It's nothing new, but at the end Sterne seems to advocate sensuality for its own sake, realizing that joy and sorrow are two sides to the same coin that is man. Leading up to the carousal, Tristram slows everything down in the Languedoc. He feels like he was escaped Death and can savor everything life has to offer, including other people and the scenery.

Tristram returns to Toby’s amours in Volume VIII, describing love as yet another military campaign. The widow Wadman’s approach to the courtship of Toby overpowers her foe. When Trim tells Toby about his love affair, it becomes clear that love and arousal are conflated (or better yet, become the same thing). That man (and woman) has two wicks (Ch. 15) has been suggested before by Sterne although in much less explicit terms, although he proposes there is a correct order in lighting the wicks to maximize the flame. In addition, if it wasn’t apparent before now, it becomes clear that this novel represents Tristram’s Hobby-Horse. Also becoming clearer is that the Hobby-Horses of the characters are more than just obsessions—they are how the characters experience the world around them. The Hobby-Horses act as filters in how the4the world is experienced.

Walter calls out his wife’s curiosity (one he is guilty of as well, but he does not indict himself) in Volume IX, which highlights the voyeuristic nature of the reader in reading to find out more about the Shandy family. Whether or not we agree that marriage is like a prison (or the Inquisition, as Trim and Toby seem to suggest), we continue to read about them despite digressions and omissions in order to see what happens to the characters. Tristram’s attempt at an invocation to Cervantes’ inspirational spirit quickly digresses, but radically changes course with the beautiful story of Maria. The reader sticks around because it is never clear what is just around the next bend. Some things are predictable, however, like the outcome of the widow Wadman’s obsession with the location of Toby’s injury will never be answered. The abrupt end of the book seems to be the ultimate digression by Sterne, demonstrating that we will never find the answers to how things will turn out regardless of twist or turn. He claimed mastery over the reader with his pen and demonstrates just how much control he has with this ending.

That Tristram himself is rarely in the book also seems to be of little importance—the act of writing the book constitutes his life. There are so many comments upon writing in these three volumes that it is difficult to pull them together in a short coherent summary so I’ll list a few of them below:

And there are many more quotes, like Tristram deflecting criticism on how slow the story progresses in order to place the blame on the characters. I quote these, though, to try and further strengthen Sterne’s tie with writing as a metaphor for life. In Volume IX, Chapter 25, just as Tristram is about to turn back to the two blank chapters (the eighteenth and nineteenth), he promotes what he calls “a lesson to the world, ”to let people tell their stories their own way.” This is one of the key themes of the book, not just for writing, but letting people live their stories in their own way.

I’ll let the academics argue whether Sterne finished the book or not. I do know I’m glad I finally read this unique work. As it is easy to see the influences on him (Pope, Swift, Locke, etc.), it will be interesting to see Sterne’s influence on other writers, especially in the next book. 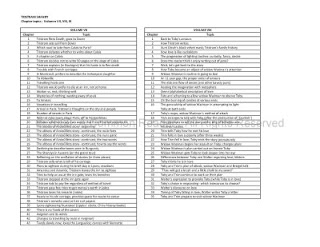 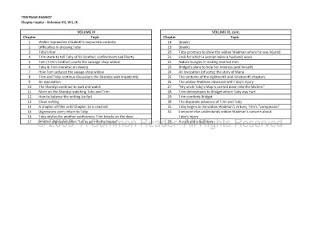