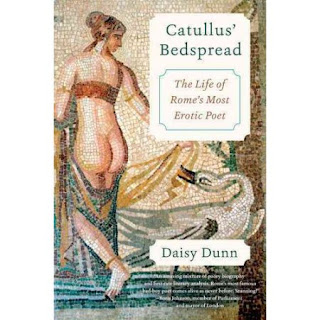 Catullus' Bedspread by Daisy Dunn, released to coincide with her translation titled The Poems of Catullus (also from Harper) looks at the life and work of the poet commonly known for bawdy writing. As Dunn demonstrates, Gaius Valerius Catullus also turned out poetry that provided reflections and insight into the tumultuous times of his age, as well as influencing the poetry of Ovid, Virgil, and Horace (and other significant poets). His mini-epic, Poem 64, which Dunn nicknames the "bedspread poem," is a stunning achievement. The poem hss a maze-like structure describing artworks within artworks, comparing the mores of his modern times unfavorably to the mythical Golden Age.

Catullus' Bedspread has two distinct but intertwined goals. The first goal attempts to provide a biography of the poet. As Dunn highlights, "There are very few surviving sources for Catullus' life. Practically everything that can be known about him must be extracted from his book of poetry." But as Catullus points out in his poems, a poet's writing doesn't necessarily reflect the author's life. Dunn acknowledges that Catullus' poetry was meant for "public consumption, and not necessarily as a faithful account" of his life. So we know we're entering dangerous ground when relying on his poems for facts about his life. So how does the biography goal work out?

I'll admit I'm extremely wary when it comes to speculative biographies, especially at moments when Dunn decisively states things Catullus did or experienced. That being said, many of Dunn's key assumptions track consistently with what I've seen presented in other recent works, although I must note my background in this area is limited. The general framework of Catullus' biography, what is generally accepted, yields only a glimpse at what must have been an interesting life. Born in approximately 82 BC, he was raised in Verona while it was part of Cisalpine Gaul (people there wouldn't be granted full Roman citizenship until 49 BC). Since his family was well to do, his father would have met with many influential people of the day as they passed through the area. Catullus moved to Rome around his 21st year. We know he worked in an administrative position for a year in Bithynia, then died in his 30th year, around 53 BC. Not much for hard facts, is it? Yet we have his poetry, which hints at a lot depth in an unsettled soul during those turbulent times.

This leads to the second goal of the book, in which the turmoil of the era in addition to his tumultuous life infuses his poetry, The literary analysis of his work by Dunn shows the influences of and experimentation within his works. Or as Dunn puts it, "Catullus provides the poetry; I offer something of the world that informed it. ... If together he and I can bridge the distance that lies between us, then even the most labyrinthine of his poems sing." On this point I think Dunn does an excellent job, putting the poems in context with what is happening in Rome and its lands at the time.

And what a time it was. The decade of Catullus' birth saw the civil war between Sulla and Marius. A decade before his birth Rome experienced the Social War, where Italian allies demanded full citizenship. In his childhood, Catullus would have heard about Sulla's dictatorship and his death, the never-ending conflict between Mithridates and Rome, and the Spartacus revolt. In his teens he would have heard about Pompey's success against sea pirates and his eventual defeat of Mithridates. His move to Rome would have been around the time of Pompey the Great's third triumph and Caesar's governorship of Further Spain. He would have seen the formation of the First Triumvirate between Caesar, Pompey, and Crassus and the start of Caesar's Gallic War. Catullus lived long enough to see Cicero's exile and recall, hear about Caesar's attempts to invade Britain, and possibly even Crassus' death at the battle of Carrhae.

These were interesting times indeed, and Dunn does a great job of putting Catullus' writings in the context of these events. In addition, she also demonstrates the major influences on Catullus, especially that of Sappho and Callimachus. Catullus' poems include details on daily life with pointed political commentary. Dunn's analysis of Catullus' writing was the most lively and entertaining part of the book. The more I learned what was behind the subject...the "secrets and allusions in Catullus' Latin which take some teasing out" as Dunn puts it...the more appreciative I am of his poems.

I highly recommend the book for the spotlight Dunn focuses on Catullus' writing and the political and social dynamics of the time (and place) influencing his poetry. As I mentioned, there are some parts of the biography section that trouble me, but Dunn makes her approach clear and provides plenty of contemporary and historical notes and sources supporting her narrative. While her conjectures about his life based on his poetry and from these sources aren't flights of fancy, nevertheless it's difficult to discern just how well grounded they are, but she makes clear her assumptions and approach. Her presentation of the events and context of his writing helps alleviate some of my concerns, while her literary analysis makes me want to read Catullus' works again. Fortunately there are plenty of excerpts in the book as well as the complete Poem 64 (all her translations).


Note: For anyone interested in the woman that inspired some of Catullus' poetry (whether praising or excoriating her), see Clodia Metelli by Marilyn Skinner. This biography of the woman that was likely "Lesbia" in Catullus' poems provides insight into the age, not just the political turmoil, but also the societal issues for a woman of her social rank. Also, I've really enjoyed the Yale University Press' Hermes Books Series, providing academic research behind the introduction to the books' topics. For a different introductory approach to Catullus, see Charles Marin's Catullus in this series.