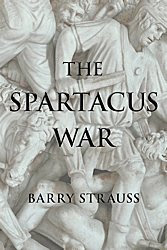 Confession--the most I have seen of Stanley Kubrick's film Spartacus is the clip that is shown in the movie Clueless ("Christian had a thing for Tony Curtis so he brought over Some Like it Hot and Sporadicus"). So while I'm clueless on the myth, I'm also woefully ignorant on the history behind Spartacus' uprising. After reading several reviews, I took the plunge and ordered Barry Strauss' The Spartacus War

Here is part of one positive review:

Insurgency and Counterinsurgency in the First Century BC, (John Wilson, Books and Culture)
It is conventional, when writing about novels or movies, to avoid giving away too many details of the plot, lest the special pleasure of surprise that comes with a first reading or viewing be lost. History is typically a different affair, but in some cases—The Spartacus War is one—the same considerations apply. Since I'm writing in part simply to urge you to read this book, I don't want to spoil the pleasure you'll take in following the narrative the first time through. From the outset, yes, you'll have a pretty good idea what the final outcome will be, but that plays out as a sense of tragic inevitability to be held in tension with the unfolding particulars, the twists and turns of contingency. Once you have finished that first reading, I expect that many of you will do as I did: start over at the beginning and read through again with the whole arc of the narrative in your head, pausing here and there to consider scenes you raced through the first time.

What will particularly strike you? We have a sense, built from countless impressions since childhood, of a certain implacability to life in the Roman world, whether—as here—in the waning days of the Republic or in the imperial era. So this isn't new, but it is still striking, and it's epitomized in the fate of the gladiators: men who are enslaved in order to provide entertainment for others, to wound and kill or be wounded and killed. Rebelling against this fate, Spartacus magnificently embodied a human impulse that can't be limited to any one place and time. ...

Here and at many other points, The Spartacus War pushes us to wrestle with moral complexity. It's a great triumph that Strauss does this in a book the style of which owes as much to the "democratic prose" of the hard-boiled detective novel (as Ross Macdonald put it) and its heirs as to any school of history-writing. The sentences in The Spartacus War are lean. The narrative moves fast. Strauss neither condescends to his readers nor panders to them with the desperation of many pop historians. He writes history for adults.

Update: Some comments on the book can be found here.