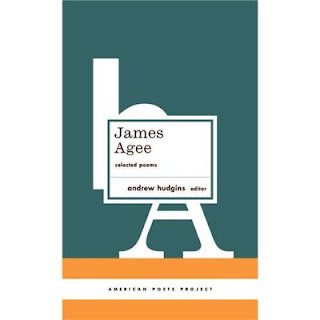 I love it when many things come together unexpectedly and in ways you could never imagine. After posting on Merrill Moore and his poem “No Envy, John Carter” last week, what do I come across today? The recently released James Agee: Selected Poems (American Poets Project)

, and within it the incomplete satire John Carter. But to make things more than coincidental, look at the influences mentioned and alluded to in just the first two stanzas:

Like Byron, I’ll begin at the beginning.
Unlike that better bard, my lad’s a new one,
Expert in charm, supremely so in sinning,
Nevertheless he differs from Don Juan
In ways enough to set your brain to spinning.
For how he differs, read the books ensuing:
For this time’s being and this being’s place
Are both beginning and in medias res.

In medias New York State stands the Homestead;
In medias that, in medias modest gloom,
In a large room: in medias that, a bed:
In medias which a man and wife consume
The night with pleasure: for they’re three weeks wed,
And the bride’s trained at last: in medias whom
George Carter labors lovingly: deception
Is not my aim: you’re in at the conception.

Sad to say, the poem doesn’t improve from there. In the four dozen stanzas of this fragment, we never meet John Carter but do get to learn how Leonard Dash lost his virginity. Judging from his experience, I don’t envy Dash’s dreams either.

In addition to the coincidence of the poem’s name, I loved the confluence of Byron and Sterne, especially after commenting on both in discussions on Pushkin. Later in the poem, it is noted that “My poem thus far is heavily digression, / Some critical, some moral, some just dirty” just before going on yet another digression. Let us now praise failed attempts…
Posted by Dwight at 3:14 PM