The Story of Doctor Dolittle 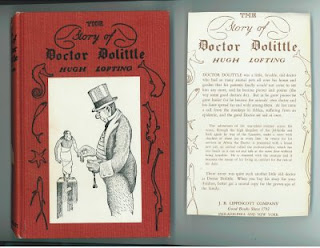 My parents kept all my books from when I was a kid, including this copy of Doctor Dolittle that one of my brothers gave me over 40 years ago. My wife and I have been reading it to the boys, and I should finish the last two chapters tonight. To say that it underwhelms me, as compared to when it was first read to me, would be an understatement. The boys love it, however, and it delights me that the book would make the perpetually enraged PC nannies even more upset. I wouldn't be surprised to hear that someone has tried to ban it.

The boys love hearing about Jip and Polynesia and Chee-Chee and Gub-Gub and the pushmi-pullyu et al., so I'm not going to worry about my feelings toward it. Every night it has been "We'll read from Doctor Dolittle, right?" Good thing I have a box set of more Doctor Dolittle books. An excerpt:

So that was the way the Doctor came to know that animals had a language of their own and could talk to one another. And all that afternoon, while it was raining, Polynesia sat on the kitchen table giving him bird words to put down in the book.

At tea-time, when the dog, Jip, came in, the parrot said to the Docto, "See, he's talking to you."

"Looks to me as though he were scratching his ear," said the Doctor.

"But animals don't always speak with their mouths," said the parrot in a high voice, raising her eyebrows. "They talk with their ears, with their feet, with their tails--with everything. Sometimes they don't want to make a noise. Do you see now the way he's twitching up one side of his nose?"

"What's that mean?" asked the Doctor.

"That means, 'Can't you see that it has stopped raining?'" Polynesia answered. "He is asking you a question. Dogs nearly always use their noses for asking questions." 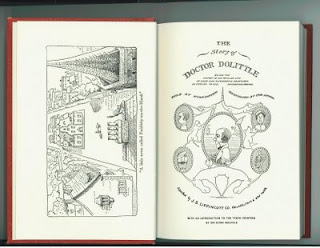 Email ThisBlogThis!Share to TwitterShare to FacebookShare to Pinterest
Labels: Books, Books for children

Another great entry. I like these interspersed with the main discussions.

Thanks...haven't had the time to do them lately so I'm just making the time!