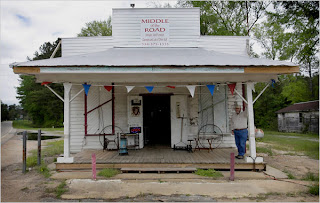 The Middle of the Road antiques store on Highway 14 in Sprott, Ala
Photo: Gary Tramontina for The New York Times
Picture source

Be careful what you allude to...you may see an article on it a couple of days later:

On the Path of Walker Evans has Laura M. Holson retracing some of the Alabama trek the photographer made in 1936. Despite the occasional tone of the article, which can sound like an anthropologist visiting an aboriginal tribe, the pictures of then and now in Hale County, Alabama (not too far from where I grew up) are an interesting comparison. Follow the link of the article for additional photos. Excerpt:

Ms. Hale owns the antiques shop that replaced the post office. She motioned to a faded poster tacked to a back wall. It was a copy of a black-and-white photograph of the building taken in 1936 by Walker Evans, whose images for New Deal agencies have come to define Depression-era poverty in the rural South. It is barely recognizable now, the building painted white, the second story toppled by a storm. Still, there are a few reminders of what Evans might have seen when he stopped by 70 years ago: a hand-painted Sprott sign hangs on a wall and an old refrigerator is stocked with Coke. [...]

Through May 25, Evans enthusiasts can see photographs and some of the 9,000 postcards he collected during his travels as part of an exhibition at the Metropolitan Museum of Art in New York. Those interested in experiencing that world on a weekend trip can spend tranquil days exploring the roads Evans drove around Birmingham, Marion and Greensboro.

Evans is best known for his photographs for “Let Us Now Praise Famous Men,” which chronicled rural poverty in the Depression. The book was written by James Agee, who along with Evans lived with three sharecropping families for a month not far from Greensboro in Hale County. It was published in 1941 by Houghton Mifflin and, in time, garnered praise from social critics as well as the ire of some who said it portrayed Southerners as backward and ignorant.

But “Let Us Now Praise Famous Men” contains only a small selection of the nearly 1,000 photographs Evans took while working in the mid-1930s for the Farm Security Administration and the Resettlement Administration. And it can seem as if little has changed in the close-knit towns that sprang up along the country roads that zigzag across central Alabama.

Information of the postcard exhibit at the Metropolitan Museum of Art, along with a few images of exhibited postcards, can be found here. I haven't had much luck at the Library of Congress Prints & Photographs Division search or any other online site that has a good display of Evans' photos of this trip. Ralph online (The Review of Arts, Literature, Philosophy and the Humanities) has a few additional photos from Evans' and Agee's book. A follow-up article by Fortune magazine (which never published the original story they sent Evans and Agee to do--too subversive and too long) is well worth the read. 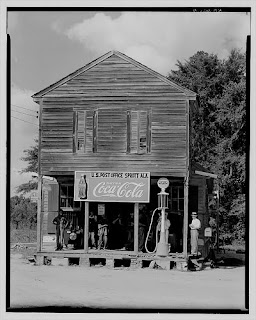