The Poison King: The Life and Legend of Mithradates 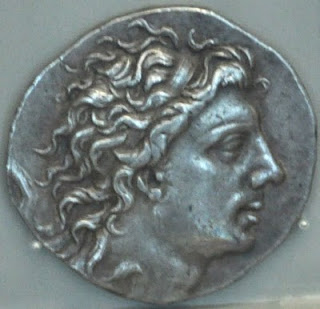 The Poison King: The Life and Legend of Mithradates, Rome's Deadliest Enemy by Adrienne Mayor

For audiobooks I’ve rarely gone beyond a couple of sentences on my reviews. I’m still feeling my way out on expanding any comments for a book I’ve listened to instead of read, but I’ll give it a try here…

Mithradatism: the practice of protecting oneself against a poison by gradually self-administering non-lethal amounts. The word derives from Mithridates VI, the King of Pontus, who so feared being poisoned that he regularly ingested small doses, aiming to develop immunity. (Note: there are many variations on the spelling of his name.)

The life of Mithradates (134 BC-63 BC) provides an amazing story of a ruler that challenged Rome for several decades. It’s often been said that Rome’s enemies provide larger-than-life heroes--most people can describe something about Spartacus or Hannibal. Mithradates proves to be on the same scale as these men. In 88 BC he engineered a massacre of Roman citizens in Anatolia, wiping out the Roman presence with the slaughter of over 80,000 people (estimates from that time). He was able to tap into anti-Roman sentiment throughout the eastern regions of the Roman Empire, performing feats that would go down as legendary. When escaping the Roman army he marched his troops across the Caucasus Mountains. His three wars (and intermittent peace) with Rome spanned a quarter of a century before he ended his own life, outlasting the Roman generals Aquillius, Lucullus, and Sulla. Pompey’s victories over Mithradates didn't directly cause his capitulation—it took internal strife and rebellion for him to take his own life.

Adrienne Mayor synthesizes the various histories and research to provide a rich history on this most remarkable person (although her outstanding misstatement of recent history in the introduction gave me pause whether or not she could separate propaganda from fact--maybe the distance of time helps). I already planned on reading many of the original sources that Mayor relies on but it’s nice to have her as a guide, especially highlighting the passages in the various texts where the facts are conflicting. The book could have been shorter—at some point during her long, drawn-out fantasies of his youthful exploits I couldn’t help but ask what hath John Lewis Gaddis (Landscape of History) and Niall Ferguson (Virtual History) wrought? Even with these caveats, it’s a history that rewards the reader or listener.

Update: I just found Dorothy King's post in which she invites Adrienne Mayor to fill out the Proust Questionnaire for Mithradates. My favorite part:

My favourite thing to do is: Chariot racing, hunting, feasting, drinking, pottering in my poison gardens, experimenting with toxins and antidotes

My idea of happiness is: A successful Great Hunt, celebrated by a Splendid Banquet, followed by Thirteen Nights of Love with my beloved Amazon queen, Hypsicratea

bindiji, feel free to send me an email and I'll be happy to discuss it that way (see my profile for address).