Kaputt by Curzio Malaparte, translation by Cesare Foligno
(For a note on this book as a literary work instead of a memoir, see the earlier posts on Kaputt)

When night began to rise from the sea with its large bunches of violets already damp with nocturnal dew—at night the sea puts on its windowsills large bunches of violets that scent the air, filling the rooms with the pleasing breath of the sea—my friend said, “The night will be clear. They will certainly come. I must put the presents for the British flyers in the orchard.” I did not understand, and I was puzzled as I watched my friend enter the house and come out carrying a doll, a little wooden horse, a trumpet and two little bags of sweets which he, without saying a word and perhaps mischievously enjoying my bewilderment, went about carefully placing here and there among the rose bushes and lettuce clumps, on the pebbles of the narrow path and on the edge of a bowl in which a family of goldfish softly flashed.

“What are you doing?” I asked.

He gazed at me with a serious expression and smiled. He told me that his two children, who were already in bed, had been overcome with a terrific fear during the first bombings, that the health of the youngest one had been seriously affected—and that he had evolved a means of changing the fearful bombings of Naples into an entertainment for his children. As soon as the alarm hooted through the night, my friend and his wife jumped out of bed and, gathering the two little ones in their arms, began shouting merrily: “What fun! What fun! The British planes are coming to throw their presents to you!” They went down into their cellar that offered scant and ineffectual shelter and, huddling there, they passed the hours of terror and death laughing and shouting, “What fun!” until the boys fell happily asleep dreaming about the presents from the British flyers. From time to time, as the crash of the bombs and the crumbling of buildings came nearer, the little ones awoke, and the father said: “Now, now, they are throwing down your presents!” The two boys clapped their hands with joy, shouting: “I want a doll! I want a sword! Daddy, do you think that the British will bring me a little boat?” Toward dawn, when the hum of the motors moved off fading slowly into a sky that was already clear, the father and mother led the children by their hands into the garden, saying, “Look for them, look! They must have dropped them on the grass.” The two boys searched among the rose bushes, wet with dew, among the lettuce plants and the tomato stalks, and they found a doll here, a little wooden horse there and, farther off, a bag of candy. The two children were no longer afraid of bombings, instead they waited anxiously for them and welcomed them joyfully. Some mornings, searching through the grass, they found little sping-propelled airplanes—undoubtedly poor British airplanes that those nasty Germans had brought down with their guns while they bombarded Naples to make Neapolitan children happy.

Not a bad metaphor for Malaparte’s book, except he doesn't try to hide the underlying truth about the war. His intentions, aesthetically clear and morally open, tend to overwhelm his story at times. The anecdote of Ante Pavelic, the Croatian wartime Chief-of-State, and the basket with forty pounds of human eyes is told in this section. Over-the-top gothic fantasy? Of course, and totally unnecessary. Malaparte uses the story as a short-hand account of the changes he saw in Pavelic and the divergence between his rhetoric about goodness and justice and what was really happening.

Kaputt can seem like Samuel Chamberlain’s My Confession on steroids at times but Malaparte deliberately adds ambiguities and falsehoods, such as lying about the etymology of the word kaputt. Clearly he’s trying to get at a deeper truth by adding fiction to fact, but does it work? I’m not so sure it does…but then I’m not so sure it doesn’t. (How’s that for ambiguity?) It is a question I’ll need to think about as I read the last two sections.

Eyes play a central role in this section, focusing on the ability to see what is real. His anecdote on seeing German soldiers with no eyelids (they had been frozen off during the winter they spent on the eastern front) symbolically depicts what happens when you can't block out seeing the war: the future is lunacy. Malaparte recounts many stories in this section but the theme gradually focuses on the impact the war has on women, whether it’s the daughter of Mussolini, the wife of a German ambassador, or Jewish girls conscripted into military brothels. As long as hope survives for the ambassador’s wife or the prostitutes they endure, even though they descend “little by little into the dark and lonely feminine world of Germany at war”. 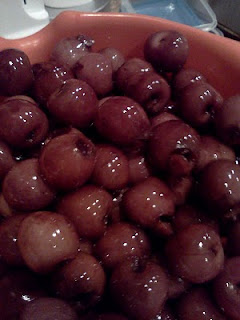 Tacky, I know, but I just strained these pitted cherries from the brandy and sugar they have been soaking in for the past six months and they reminded me of this section...
Posted by Dwight at 1:33 PM

My pleasure--it's a weird, wonderful work that has to be approached with a lot of caveats in mind.