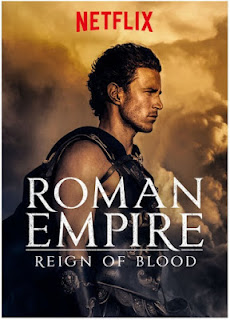 Netflix's series Roman Empire: Reign of Blood follows the recent docu-series movement, mixing historians, narration, and drama over multiple episodes. It also continue the trend moving from sword-and-sandal epics to blood-and-boobs entertainment (to paraphrase a line from Adrian Goldsworthy). The story starts with the end of the emperor Marcus Aurelius' reign and focuses on his son Commodus' disastrous years on the throne.

It's an era of history that fascinates because of the twisted nature of Commodus. Many historians mark Commodus' reign as the start of the Western Empire's descent. Edward Gibbon famously remarked that history's most happy and prosperous period ended with Commodus' accession, so dramatizing his reign, if done well, is sure-fire entertainment. So does Netflix do it well? Reviews have been generally positive. My thoughts are a little more mixed on it, and while I can't whole-heartedly recommend it, I think it does several things well.

The inclusion and integration of the historians was well done. Too often in shows/series like this, the 'talking head' portion feels like an afterthought and may not mesh well with what is being dramatized or narrated. Fortunately, the list of historians they include was first rate, as was the choice of Sean Bean as the narrator (finally, a role in which he doesn't die). Now that I think about it, Bean was probably the best part of the series. Between the historians and the drama, though, Bean's role shouldn't have been the normal 'narrator' job although that was how it was written. The historians tell us what's going to happen or sum up what what just happened, the actors show us what happens, so that leaves the job narrator to do... what? Beyond providing a bridge between scenes or filling in additional information, too often Bean is telling us exactly what we're about to see or what the historians are about to tell us.

Regarding the drama portion, the actors are fine and seem to be doing their best with clunky writing, which goes on way too long for many scenes. At the end of the series I felt like it would have been much better at about half the length, with most of the cuts coming from the drama part of the show. Cutting Commodus pouring a drink or drinking from his cup would have shortened the series by one episode alone. Too often the scenes felt too drawn out, too long, and too superfluous. The acting was fine considering what they were given. I do have to mention my wife initially stopped based on Aaron Jakubenko's looks: "Ooh, what's this?" But she did stick around because of interest in the underlying story. Or so she said.

The show's rating is TV-Mature, which it needs for the violence (usually implied more than shown), language (on occasion), and gratuitous nudity. Ordinarily I'd feel like an old fart for typing that last one, but too often those scenes definitely had a feel of "we're including it because we can." I can appreciate the difficulty in writing and incorporating all three elements: narration, historians, and drama. Now that budgets have grown for the last part, where live actors are no longer background visuals for a voiceover, it's going to be a challenge to integrate all three together and make the final product work.

Again, I hesitate to fully recommend it. The historical period covered is fascinating and definitely can use the improvements in historical accuracy provided. The lack of integration between the dramatic portion with the narration and historian commentary, though, is what causes my wavering. I would have loved this to succeed better at it. I am intrigued at this being listed as Season One. There is so much to mine and use from the Roman Empire in such a format. Here's hoping they are able to improve the series.

Update: I wish I had seen this article at Decider earlier. One of the fascinating thing about Commodus' reign is his sister's involvement in the assassination plot to kill him. Just what did she hope to gain if he died? From the article: 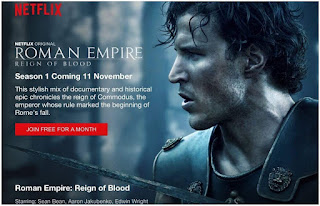 Pardon the inclusion of advertisement...I like this picture so much better than the main poster
Posted by Dwight at 2:29 PM

How delighted I am to "meet" you, Dwight, after the comment you left on my blog. I am so glad that you're willing to reread Captivity and share in the online discussion of it (whatever that may be). Perhaps we'll have a few optional check in points, in which we leave posts on our blogs? Well, it is to be determined, and I surely am open to suggestions. Read-alongs are one of my favorite things about blogging. I'm looking forward to this adventure, and have surely needed something to look forward to in blogging as in this, my tenth year, I find myself entirely too laissez-faire.

Thanks Bellezza. Captivity is a great book and I feel guilty I haven't posted on it, which is why I want to revisit it during your read-along. It's one of the few books I've ever given as a gift (although it obviously isn't for everyone, unless they need a doorstop, too). The details it provides about and within the Roman Empire is remarkable.

I was a little confused by your article. At one point, you say "The inclusion and integration of the historians was well done." Later, though, you say "The lack of integration between the dramatic portion with the narration and historian commentary, though, is what causes my wavering."

Do you mean that you found the dramatic portion poorly integrated?

For myself, I found the rotating commentary of the historians to be disruptive. If they insist on commenting on everything, then should do it at the beginning of the episode, and this just let the dramatic scenes go. As it was, it was like a road full of potholes for me - I just couldn't get into the story with them chiming in over and over.

Reading back through this I can see where the confusion can come in. I thought of the three parts (historians, narration, dramatic reenactment), the dramatic portion was the weakest portion. Not that it was bad, but as I mention it felt a little clunky at times as well as being repetitive.

Your point is well taken, though, and I agree that it felt stilted or jerky. There is so much overlap between commentary and action that it seems something should one area should have been shortened. Your suggestion separating the commentary and the drama more so the action can flow better is a good one. I'm interested to see where they go with this, and hopefully they can make some improvements.