Stevie in the Bloodbath by István Örkény 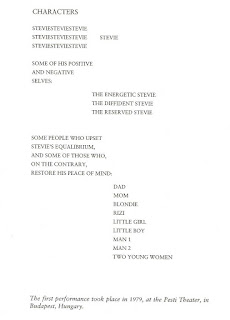 Character list for “Stevie in the Bloodbath: A Grotesque Play in Two Parts” by István Örkény
A Mirror to the Cage: Three Contemporary Hungarian Plays
Edited and Translated by Clara Györgyey
Introduction by Ervin C. Brody
Fayetteville: The University of Arkansas Press, 1993
ISBN 1557282676

Motto:
This age, our parent—executioner
provisioned us with a bitter chance
that we may be heroes and murderers,
wielding the iron, in turn to be branded,
doers of meager deeds, dreamers of mighty dreams,
savers of lost souls, destroyers of our own selves,
at the same time, in the same place, and in the same person:
to each his own, according to his turn.

From István Örkény’s forward to the play:
This play is set in the twentieth century. I have chosen only basic situations from the events of our time. In more modern terms, I present archetypal situations that could have occurred at any time, anywhere, not just in Hungary in those days. At the premier performance of Ubu Roi, Alfred Jarry, one of the founders of modern drama, told his audience: “The action takes place in Poland, that is, nowhere!” I, on the other had, would like to shout into the ears of every spectator: “The action takes place in Hungary, that is, everywhere.”

As you will read in the playbill, there are four Stevies instead of one, among the characters. Many people asked my why. Ordinarily, as they suggest, a person bears only one name in a drama. In this case, however, it is not only the name these four share. Being each others’ contemporaries, their observations, experiences, and collective memories are also roughly the same. Only their attitudes are different. … We might stand on either side of the barricades at the same time and in the same person “according to his turn,” as I stated in the play’s motto. …

Postscript: I wrote the play in 1969, but “events” independent of me prevented its staging for over ten years. In the meanwhile, however, Stevie in the Bloodbath was published twice and received an enormous amount of wildly contradictory criticism, perhaps not without reason. (20-23)

What I’ve read of Örkény, One Minute Stories, The Flower Show, and The Toth Family, demonstrates a dark side to his irony and humor. This play proves to be darker, more ambivalent, more pessimistic. The bloodbath of the play’s title is the twentieth century and the play incorporates several of Örkény's One Minute Stories (I wish I knew which came first, but it doesn't matter for the humor and impact). The grotesqueries and absurdities of history and life can’t adequately be captured by irrationality and ludicrousness, but at least they can be highlighted by doing so.

Stevie exists as one person, but has (at least) two identities and, as you see from the Character List, at least four personalities. It helps that he also has numerous lives since he dies several times during the play. His mom mourns “[H]ow many times do I have to mourn my son?”, a figurative question probably asked often in Hungary during the 20th century. If nothing else Stevie embodies persistency as he attempts to break out from his constraints, usually dying as a result, only to return and try again.

Here’s one scene, where little Stevie, after an instantaneous conception, birth, and toddler phase, is taken by his mom to enroll in school. A problem quickly arises:

(page 59) MOM: Problem, comrade?
RESERVED: Look, Madame, our school’s for normal, healthy, flesh-and-blood kids. Yours won’t feel at home here. Why don’t you put him into the School for the Retarded and the Disabled?
MOM: We’ve been there already. They won’t take him. Our child, as you can see, is neither retarded nor disabled, he simply does not exist in the ordinary sense.
RESERVED: But how DOES he exist, if I may ask?
MOM: I don’t want to discuss it in front of him…(Steps closer, whispering) you see, he’s a little vacuum. (69) …

MOM: Not seeing him doesn’t stop me believing in him.
BLONDIE: Believing? Only believing in him, nothing more? How can I marry such an elusive person? How can I expect him to give me a child?
MOM: Try it! If you can’t believe in him, then he really does NOT exist, because, you know, he’s only a little vacuum.
BLONDIE: Vacuum??
MOM: To be more precise, a bit of an empty space, that is, a nothing. And yet, see how far he’s got!
BLONDIE: (in despair) A nothing?
MOM: Why, isn’t that enough? The two of us can love this nothing because that’s all we have. (72)

There are several examples of Örkény’s statement of manning either side of the barricade. At one point Stevie is tasked with murdering 127 fellow Hungarians. When the gravity of what he’s expected to do sinks in, Stevie chooses to stand in line with the victims while the firing squad follows his orders. Blondie wishes to marry Stevie in one scene while testifying against him in another, although her conscience suffers. Stevie confesses to everything good and bad, being a molester and a messiah, while there is a constant tension regarding the meaning of existence. Stevie turns out to be a reflection of 20th century forces, both in what he does and the forces that act on him.

A description of the scenes will sound flat, so I won’t describe many of Stevie’s various roles, identities, and propaganda that cover events across the 20th century. There is a courtroom scene where the judge and prosecutors speak gibberish, calling to mind the early days of the Soviet occupation of Hungary and their tribunals conducted only in Russian. Pervasive propaganda often changes the way people think, regardless of how much it lacks in logic or art. The end of the play covers one possibility of what’s in store for Hungary, as one of Stevie’s personalities (Diffident) leads a group on a tour of Budapest as it is (possibly) destroyed, although there is building going on at the same time. This ambivalence is what lends the play its charm and power.

Thanks for bringing this to my attention. Jarry updated for 20th century Hungary? Don't think I would've thought of that, but the play's dark humor sounds great.

My pleasure. While it doesn't make any difference, I wonder which came first in this play--the one minute stories, then his adaptation of them for the play? Or the other direction...or maybe some of both?

While the play is political fortunately there is more to it than that. The dark humor helps bring it all together. I'll post on the other two plays in the next couple of weeks. They are really good, too.