The Flower Show by István Örkény 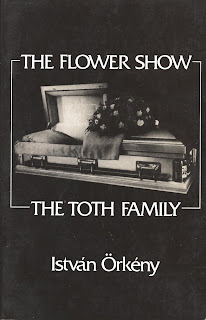 Although the scene and characters [of The Flower Show] are those of Budapest, the idea behind them came to Örkény in New York. Switching on the television set on the last day of a visit to America, he happened to see a documentary on death and dying. It set him thinking. How would an analogous program look in Hungary? And what if instead of merely interviewing the mortally ill the up-and-comping young documentarist contracted to film his subjects while they died and catch the actual moment of death, the transition between life and death?

Örkény chooses the subjects carefully: a professor of linguistics, a woman who works packing flowers, and a popular TV news commentator. Each represents a different segment of society, a different frame of reference, a different set of prejudices. The role of the news commentator is particularly telling because in him Örkény makes most explicit the issue he raises in one way or another on every page: how the very fact of reporting the news influences the news, that is, how it alters what actually happens.

(From the introduction by Michael Henry Heim, who also translated The Flower Show)

I apologize for the blog silence but one son's stomach bug has taken precedent over reading and posting. I was so impressed with some of Örkény's One Minute Stories I wanted to explore more of his works. I'll start with the two novellas in this volume, focusing on The Flower Show first. If I had to look for equivalents in what I've read so far of Örkény with something the English-speaking world is familiar, I'd nominate Monty Python’s Flying Circus. If I had to pick a comparison for the The Flower Show (1977), though, I'd pick Paddy Chayefsky's screenplay for Network (1976).

An assistant TV director, Aron Korom, proposes a documentary titled How We Die, focusing on three terminally ill patients and their last hours in order to focus on life's "necessary end," giving the "audience the priceless gift of the patients' most dramatic moments." Fortunately Korom promises to be tactful, not wishing "to offend the viewers' sensibilities or their taste." It turns out his idea was rejected solely on the title, which was later changed to The Flower Show.

The theme underlying all three patients looks at what is most important to these terminal patients in their last days. As the TV commentator notes late in the novella, what we find important is situational, not necessarily what we think it will be in advance. In addition to what is important to the patient, though, is what is important to the people around the dying person and the contrast between the (often) opposing goals. This opposition provides much of the humor and irony of the novella. For example, the professor tries to finish the book he is writing, taking his wife on as his typist, then assistant, and eventually a colleague. Because of this fulfillment and how he treated her, she comments that "the only time I was happy with him was when he was dying."

Mrs. Miko is the woman who works packing flowers. Her episode in the novella adds dimensions since, along with a close family member to the dying, we see co-workers and people that might benefit from the person's death. Their conflicts in interests and claims about what happens provide plenty of drama, irony, and satire. Everything comes together in the final terminal patient, TV commentator J. Nagy. Except...he wasn't exactly terminal. He had a heart attack six years earlier but continued to live it up, enjoying food, drink and women. Especially women. J. Nagy was a friend of Aron's and provided many of the objections to the documentary from the start:

"Remember how you said your project would combine poetry, science, and philosophy? Well, that's a lot of hot air, my friend. In the first place, because death is ugly and slapdash and art is all beauty and composition. And in the second place, there's no philosophy in a one-time thing like death. Philosophy is all generalizations. So philosophy's out too. And with science you're even farther off course. Any physicist will tell you that during the observation of minute and sensitive processes the mere presence of instruments of observation distorts the course of events. In other words, the death I die in the presence of the camera will differ from the death I would die if, say, only Aranka were present. So the scientific value of your film is nil, no more than an illusion. ... Forget about art and science. Shoot it as you see it. Make an honest documentary. Go about it as if you wanted to show a group of divers working underwater on a bridge. The only unusual thing is that in your film the divers drown."

Örkény explores the relationship between art and life as well as the role of art in life: "The mere existence of a work of art gives it meaning," Aron argues. OK, but if art does have meaning and influence, then what responsibility does the artist have regarding the what happens because of his art?

Which leads us back to the subject of what happens to the people around the dying person. J. Nagy's death focuses on the responsibility that should fall to Aron and his project. J. Nagy was healthy when Aron approached him to be in the documentary. Because of the documentary, though, J. Nagy confused his role in life, which will reach a natural end, with his role in the film. He retains his lustful ways (instructing Aron on the best time and angle to ogle the doctor's breasts, for example) but his deterioration coincides with his interest and study in how he will eventually die. Aron castigates J. Nagy for his boring proposals for death, not realizing J. Nagy was letting Aron know how and when he would die. Aron films what he sees as it happens but fails to realize what he is seeing.

There are plenty of other things to explore in this novella--Örkény packed it full of things to think about regarding the common unease about the topic of death, our varying reactions to it, and the voyeuristic role of the media. Why are the moments around death our "most dramatic moments"? Since we all know we will eventually die, why does what we find important supposed to change if we know the end is near? Örkény doesn't propose any solutions, but he's more than happy to lampoon some of the problems, many of which come from our so-called advancements.

I thoroughly enjoyed it and highly recommend finding a copy to read. My post on The Toth Family can be found here.