One Minute Stories by István Örkény 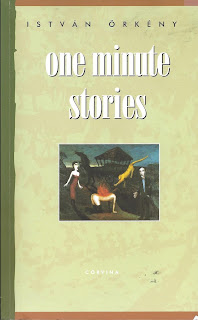 I had been reading about some Hungarian plays and ran across István Örkény's name several times. The more I read about him the more I wanted to read something by him. I selected a collection of his shortest works for a taste of his style and I enjoyed them quite a bit. While I found the quality in this collection hit or miss, the hits are stellar and make me want to read more.

Örkény was born in Budapest in 1912 (so I missed his centenary year by a few months). Hungarian Literature Online provided a short biography (along with a list of works in English translation…many, if not all, out of print):

Born in Budapest in 1912, Örkény studied pharmaceutics and chemical engineering in the 30s, and published his first collection of short stories in 1941. One of these stories, published on the eve of Nazi terror, is about a city where the inmates of a lunatic asylum take power and introduce insane measures. Örkény soon found himself as if in the middle of his own story when the war broke out: when he was drafted, he reported to the army in his officer’s uniform, but had to take it off immediately: though a Catholic by religion, he was of Jewish origin, and was therefore sent to the front on labour service in 1942. He was taken prisoner of war in 1943. When he came home in 1946, he wrote a book on his experiences as POW in Soviet Russia. However, in postwar Hungary, which was drifting towards Communism, this was not considered a favoured topic, and Örkény, who initially sympathized with Communism, started to write bad novels which fitted the current ideology. He soon became a leading ‘socialist realist’ writer, but eventually became disillusioned with Communism, and after the 1956 Revolution, with which he was affiliated, he was squeezed out of the literary scene and subjected to publication bans. That was when he started to write his one minute stories. In the second half of the 1960s, his books were published again and his plays were performed. In fact, he became one of the most successful playwrights of his era who opened new paths for Hungarian drama with his absurdist plays. His dramas are determined by the sense of being Eastern European and Hungarian which—as he stated—equals to living with a constant feeling of lack. He died in 1979.

One Minute Stories comes with “handling instructions,” an introduction of sorts by Örkény to these types of stories. In his own words:

Despite their brevity, the stories in this book have a certain amount of literary merit. They also have the added advantage of saving us time, since they do not require our attention for weeks on end. While the soft-boiled egg is boiling or the number you are dialing answers (provided it is not engaged, of course) you have ample time to read one of these short stories which, because of their brevity, I have come to think of as one minute stories. You can read them whatever your mood, whether you are sitting down or standing up, in fine weather or foul. They make good reading even on a crowded bus. Most can even be enjoyed on a walk.

Do pay attention to the titles, though. The author strove for brevity, which put a special burden of responsibility on him when choosing the titles for his stories, of which they form an organic part.

Do not stop at the titles, though! First the title, then the story. It's is the only proper manner of handling.

(Note: there are minor differences between this translation and the one in the book.)

Many of the stories really can be read in one minute while some stretch out to a few pages (or minutes). The first story titled “the grotesque (a practical approach)” sets the tone for the rest of the stories. There’s nothing new in the tale—the author instructs you to bend forward and look at the world from between your legs. The skewing of everything, watching things move in a different direction from what you're used to seeing, turns out to be perfect instructions on what to expect in the anecdotes that follow. Events are shown in a different light. Things are absurd because they don't describe things the way we normally see them, but it doesn't mean things can't happen that way.

Some of the commentary regarding the influence of the USSR on Hungarian life is obvious no matter how subtle it is. The footnotes, fortunately, help highlight the nature of the barbs (although they can be as subtle as Örkény’s allusions). By the time you get to the final stories, though, the political commentary is razor sharp despite their subtlety. Conditions that Hungary had to put up with while living under the Soviet shadow comes through loud and clear despite the sly nature of the references or settings. Taken out of context, or rather outside of this collection, these stories might seem rather obtuse or enigmatic. Taken as a whole, and I’m using the term loosely since these stories reflect only a sampling of his output in this genre, he provides a biting commentary on how skewed you have to be to swallow the official party line.

Some stories stand on their own quite well without worrying about political over- or under-tones, but the most effective deal with the world under the Soviet influence. Fortunately there happens to be quite a few of his stories available online. I’m going to provide a list of some of the links that drew me in to sample Örkény’s work, and I’ll mention again that I will post more on his work in the next few months.

On Örkény:
- Örkény’s “homepage”, developed after an agreement between the Örkény Family and the National Széchényi Library. Highly recommended. The site has many links worth investigating that I won’t include here.
- His Wikipedia entry
- Hungarian Literature Online notes his centenary birthday. It includes a list of his works in English translation and a link to one of his plays with English subtitles.

At Örkény’s homepage:
Excerpts from One Minute Stories:
- handling instructions
- the grotesque (a practical approach)
- in memoriam dr. H.G.K.
- a number of variations on the theme of self-realization
- one minute biography

Excerpts from More One Minute Stories:
- a bright and distant future
- tulip in crisis
- thoughts from the cellar
- honeymooners on flypaper
- ballad about the magic of poetry

Update (17 May 2013): Another YouTube video can be found here. The description by Szilárd Szarvas:

A one minute short film about a one minute short story by István Örkény - About my well-being (Hogylétemről) [I'm guessing the title in my translation is "Inquiry into the state of my health"]. I asked a man on the street to read the short story 'About my well-being', and to tell me how he feels about it. This video was made for a contest for the 100th jubilee of Örkény's birthday.