The Imposter by György Spiró 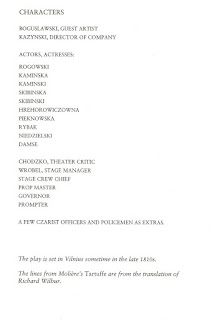 Character list for “The Imposter” by György Spiró
A Mirror to the Cage: Three Contemporary Hungarian Plays
Edited and Translated by Clara Györgyey
Introduction by Ervin C. Brody
Fayetteville: The University of Arkansas Press, 1993
ISBN 1557282676
This is one of my favorite plays I have read lately and one I would love to see performed. From the Introduction:


In his witty and beautifully crafted satire The Imposter, György Spiró triumphs with a stunning denouement, an intriguing theatrical coup de grace. With his imagination to dwell in a world different from his own in place and time—in a play within a play—he succeeded in forging a harmonious unity by crossing and recrossing the narrow runway between life and literature. The play is a political tract which lampoons dictators at the time of the Russian occupation of Poland after the Napoleonic wars in the early nineteenth century. Spiró discovered the characteristically modern chords in Molière’s Tartuffe and breathed new life into a timeless classic by bringing present and past lives into direct and vivid communication. (4-5)

Knowledge of Tartuffe is helpful in catching many of the “chords” resonating in both plays, but several of the echoing parts are deftly explained by the characters in the play. Even the title of this play references Tartuffe, using the original's subtitle as its own. The Imposter avoids becoming a one-note political play, probably (I think) by making the politics front and center. Not to mention there are a lot of other themes and motifs in the play, thanks again to the “play within a play” theme that allows for multidimensional motifs. Set in a theater in Vilnius, Lithuania, Poles are repeatedly arrested for the smallest “crimes,” such as speaking their native language. The theatrical group proves to be a sad lot, disheartened because of the troupe’s financial losses and lack of respect given them. The ugly natures of the members come to the fore as they plot and scheme against each other. As Brody notes in the Introduction, “The play presents a highly disturbing picture of cowardice and intellectual servility” as most of the actors and stagehands are little Tartuffes.

The director has chosen Tartuffe because it praises the enlightened (unnamed) ruler (Louis XIV). The situation and props make clear that the director intends to praise the Czar and likewise celebrate his insight and wisdom in order to receive a stipend that will allow the troupe to continue. The only person associated with the theater that is uncomfortable with this overt prostitution of their art for money and propaganda is Rybak. Enter Boguslawski, the renowned Polish actor and “Father of Polish Theater” intended to play the title role. While Boguslawski (damn, that’s a great name in English for this role) is a historical figure, Spiró shows an abject actor well past his prime. There’s an irony in choosing Vilnius as the setting since Boguslawski created an acting troupe there and returned after his leadership of the National Theater was through. He appears, unrecognized, the day of the final rehearsal. After revealing himself, he comes to life in helping the actors play their parts and project their roles. He listens to their complaints about what the Polish state has become (ellipsis in original):


SKIBINSKI: When I first started out, there was a Poland… Then it was lost, but at least we had illusions… uprising… Napoleon… war… But now, we have no more illusions, Maestro! They arrest people, for a joke, just because it’s permitted, and keep them for a day or two…only because their native tongue’s different and because we cross ourselves the other way… But that’s not the real problem. What matters is that we have no illusions, not even a small paltry illusion left. Not even one! (125)

What better way to provide illusions than through a theater troupe? Boguslawski encourages the players to read beyond what is said, to look for deeper meaning and the roles’ motivations. Although he doesn’t say it, he implies Orgon is a substitute for Poland—a victim of outside forces, trust, and love. The troupe attempts to shoot Boguslawski down, saying the audience only understands good and bad while complicated characters and irony go unappreciated. But how much of this is real? Boguslawski appears little more than a Tartuffe at times, apparently accepting the role only for the money (of which he is in dire need). Even the actors laugh at his performance, saying his acting betrays all the motivation he used to encourage them. The Russian governor meets Boguslawski and dismisses the previous concerns he had in suspecting and investigating the actor. Just when you suspect Boguslawski’s motivations and abilities are bogus, he pulls an inspired political prank, uniting and electrifying the audience and the troupe.

The important, political part of the performed play was omitted through Boguslawski’s machinations. The letter to arrest Tartuffe, a deus ex machine delivered from an enlightened ruler, does not arrive and the opportunity to praise the Czar is undermined. Boguslawski set the whole thing up based on a couple of comments made earlier in the play. One of the actors notes that the scene can be played with irony, making the deus ex machine “a mere empty gesture.” Rybak, a crusty, patriotic Pole, mentions how he would love to avoid the scene and not stoop so low for their craft. Boguslawski uses these comments as a starting point and makes the end of the play mean something completely different than intended. He also uses the absence of the pardon to send a direct message to the attending governor about his investigations into the actor. Boguslawski is now viewed in a different light by the remaining theater troupe…a true patriot that delivered quite the message to the Russians.

There’s an implied point sent by Spiró, who wrote this play in 1982, about the role of theater and literature in shaping Poland’s (and by extension Hungary’s) history in the pre-glasnot atmosphere in Hungary, which allowed more liberty to be taken in literature and the arts.

Additional notes on Spiró from the preface to the play:


György Spiró (1946 - ) first emerged as a powerful voice in the Hungarian literary scene in 1975 with massive historical novels whose allegorical implications were promptly understood by readers and brought him immediate success. … [The Imposter] is based on an episode in his previously mentioned novel, The X’s. The main plot centers upon a legendary figure of Polish theater history, Boguslawski, who owned and ran the Warsaw National Theater in the Napoleonic period, when Poland was divided into three parts. Because of his enormous popularity, he became a political risk in the Russian-controlled but “constitutional” kingdom. A consummate actor, Boguslawski was also a shred manipulator and a typical survivor of his age, with sharp instincts, cunning, and the ruthlessness necessary to outwit Czarist censors and serve the national cause.


struggling for freedom of expression under oppressive regimes among doctrinaire bureaucrats and in the maze of hard-line ideology. Its amusing and fast-moving action, unfolding behind the scenes during the performance of Molière’s Tartuffe in Vilinus with the Czarist governor in attendance, also demonstrates how conditions distort and corrupt both human character and art. In the course of the play, one sees its characters become entangled in greed, nepotism, immorality, and their own betrayal.

I wish more works by György Spiró were available in translation. His historical novels sound like something I would love to read. I plan to have a post on another of his plays soon.

Please please please, someone in the bay area perform this play...soon!

Update (24 May 2013): Hungarian Literature Online has several posts focused on György Spiró. Here are a few of them: