The City of Marvels by Eduardo Mendoza 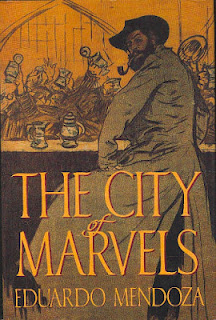 The City of Marvels by Eduardo Mendoza (translation by Bernard Molloy) has been sitting on my bookshelf for a decade. I needed the push of Spanish Lit Month hosted by Richard and Winstonsdad to finally open it. From the bookflap:

Here is the story of Onofre Bouvila, a poor Catalan country boy who arrives in Barcelona in 1886 and lies, cheats, and murders his way to enormous wealth and power.

Young Onofre first stays at a boardinghouse whose permanent residents are a distingue closet transvestite, a lady fortuneteller who treats her clients to large doses of doom, a garrulous barber who also pulls teeth, and a scullery maid who protects her virginity with the aid of a ferocious cat. Onofre, for his part, quickly establishes himself as an anarchist agitator. Yet he realizes just as quickly that his skills as organizer can be put to better use—selling a cure for baldness. He goes on to form a burglary ring, instigate real estate deals, build a film empire, but a world-famous diamond, reconstruct a mansion with eleven balconies, fall in and out of love with three women, and throw a reception for the Tsarina of Russia—where he chats with Rasputin while planning to sell arms to the Bolsheviks.

Meanwhile, in marvelous digressions, we learn about an old sailor who speaks a language no academic can identify; a nun who plays the accordion for the dying to cheer them up; a missionary priest who goes to the Sudan to make converts but is himself converted to the Dervish religion and returns home to preach sorcery; and about Eulalia, the patron saint of Barcelona, who steps down from her pedestal in the cathedral to talk to the mayor about housing problems.

I find writing about The City of Marvels difficult because I had little response to it. There are parts I enjoyed, usually with some of the digressions mentioned above, while most of the book didn’t move me to either like or hate it. Which is a shame because the book is very well done—I respect Mendoza’s talent even when reading through parts I find problematic.

I included the bookflap summary because it does a fair job of capturing the general flow of the book, which ultimately is about the development of Barcelona between the World Fairs hosted in the city in 1888 and 1929. Weaving history, statistics, lore, and fabrication into the narrative, Mendoza captures the era and the city’s struggle to modernize, oftentimes in spite of itself. Also reflected is the increasing tension between Madrid and Catalonia. To some extent the character of Onofre Bouvila reflects these struggles, first buffeted by the changes and later shaping them. Onofre’s disgust with his father, a bankrupt and scammer after his time spent in Cuba, echoes the general feeling of disappointment with the venal government. In order to succeed in this atmosphere Onofre has to exceed in cruelty and corruption, even when his intentions are good.

Every now and then the book comes alive, such as when Mendoza goes into detail about the gang war that established Onofre as the power behind a shadowy throne or when weaving a tale about Mata Hari’s capture that involves denying Spain receipt of the world's first full-length feature film. Too often, though, these scenes highlight how flat other parts feel. Despite spending a lot of time on Onofre, the character rarely seems to develop or grow, although now that I think about it, for someone so closely tied to the city that he supposedly embodies the spirit of the era and the city’s collective dreams, that may be precisely the point.

Similar to my comment in the post on The Truth about the Savolta Case, Mendoza seems to be anticipating the future while looking at the past. Just as the structure of the book uses the bookends of the two World Fairs to look at Barcelona’s entrance to the modern world, there seems to be an implied question as to Barcelona’s future. This goes beyond the then-upcoming 1992 Olympics the city would host (the book was released in 1986) and reflects on the cost, not limited to monetary measures, associated with such progress.

If you’ve read the book, I’m very interested in hearing your comments on it. And, of course, since there was a movie based on the book, I’ll be watching that and posting on it later this week (hopefully).

Update: I've added a post on the movie adaptation of the novel.

Email ThisBlogThis!Share to TwitterShare to FacebookShare to Pinterest
Labels: Eduardo Mendoza, The City of Marvels

I read The Truth of the Savolta Case many years ago and enjoyed it, but everything I've read of Mendoza's since then has disappointed me so much that I've come to think perhaps I was wrong about Savolta too. - I've not read this one though.

I don't think you're wrong about Savolta. I revisited it and still liked it although some things about it bothered me more the second time.

The frustrating thing for me in The City of Marvels was that there were very enjoyable sections but it didn't feel like all of one piece. I'll have to work on explaining that better...

Mendoza fan #2 reporting. City of Marvels has been sitting on my shelves for 3 or 4 years now and is calling loudly this Spanish Lit Month. However, it's just too long as I'm juggling Spanish Lit with my Edinburgh Book Festival reading. Talking of which, I met Mendoza when he appeared there and he reckoned his best novel is A Light Comedy. What do you think?

Aw, too bad this one wasn't more exciting. The jacket flap copy makes it seem maybe a little over the top adventure-wise for me, but I love Barcelona, am fascinated by its history, and so will let my final impressions of *The Truth About the Savolta Case* determine how quickly I get to this one (it wasn't going to be anytime soon anyway). How's *La Regenta* going, by the way?

Lizzy, those are the only two by Mendoza I've read. I enjoyed Savolta more than City of Marvels, though.

I haven't started La Regenta yet...probably next week. I may not be able to finish in July with everything else going on, but I'll try.

It'd be understandable if you don't get all the way through the Clarín, Dwight. I'm tempted to try it next month myself, but I already have several other chunksters (and several mid-sized novels for that matter) on hold till after July's over. I could read all Spanish-language books the rest of the year fairly easily, though, he he.