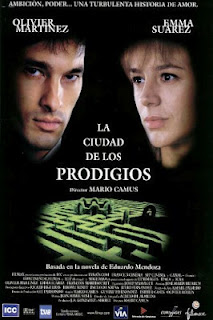 This will likely be movie week as I try to catch on posting about movies I’ve seen recently and over the past few months. This movie hits a trifecta of associations:

The movie La ciudad de los Prodigios tells the story of Onofre Bouvila as he rises in power and riches in Barcelona from the late 1880s through the 1920s. Unlike the novel it’s based on, the movie is a fairly straightforward tale of his struggles, emphasizing his love for the boardinghouse maid Delfina he meets when first arriving in the city from the Catalan countryside. Even with the choice in simplifying the storyline I think it might be difficult at times for anyone not familiar with the book—some of the machinations at times, mostly involving the gang wars, can be hard to follow.

The camera loves the stars Olivier Martinez and Emma Suárez and the lush images make for a gorgeous film…which may also be some of the problem. The dock full of diseased workers is lovely, Emma Suárez with a little dirt dabbed on her is still beautiful, the trash heap where Onofre searches for food scraps looks inviting—in short, almost no hint of ugliness is allowed in the film.

Because of Onofre’s rise though the gang/mob element of Barcelona’s underworld, similarity to movies like the first two Godfather movies can be a natural comparison. As usual, though, I’ll focus more on how the movie compares to the book. As I mentioned in my post on the novel, Mendoza weaves “history, statistics, lore, and fabrication into the narrative,” which gives it a lot of its charm. Stripping away these additional elements simultaneously strengthens and weakens the movie in the comparison. The focus solely on the storyline of Onofre’s rise allows director Mario Camus (who, interestingly enough, also directed the 1980 TV series version of Fortunata y Jacinta) to include most of the novel’s action. While several parts of the story are altered, the movie doesn’t suffer too much from the changes. Fortunately, special emphasis is placed on the political aspects of Onofre’s development. He clearly never fully backs any political group, instead using the movement in power at the time to get what he needed. Inclusion of “history, statistics, lore, and fabrication” would have severely cut back on Onofre’s story.

And yet, those elements provide much of the charm of the novel. More importantly, those elements are tied in with Barcelona, the city of the title. It may seem a subtle change in stressing the developments of the era instead of Barcelona’s catching up with modernity, but the choice of the city lies at the heart of the novel and the movie loses something for that alteration. The intertwining of Onofre’s and the city’s fate doesn’t feel completely developed in the novel (at least to me) but that seems to be the intent. The inclusion of Barcelona’s history, real and imagined, corresponds to Onfore’s rise to power. For the movie, though, it feels like the setting could have been any city with no change in feeling or impact. Similar to the book, the most I can muster is a lukewarm recommendation. You can do worse and I’m sure it will have stronger appeal to some than it did to me, my disappointment based more on what seems to be an unfulfilled realization of intent or potential. Is that a fair way to judge a book or movie? Probably not…which is why I’m taking pains to point out the basis for my lack of enthusiasm for an otherwise okay book and movie.

You don’t need subtitles to understand the following clip, which shows one instance of the interaction between Onofre and Delfina:

Email ThisBlogThis!Share to TwitterShare to FacebookShare to Pinterest
Labels: Eduardo Mendoza, Movies, The City of Marvels