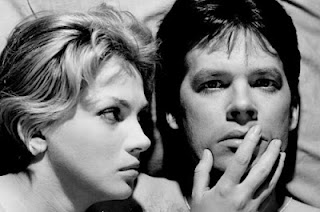 I warned this would turn into cinema week, as I continue with my erratic foreign movie posts for this year as well as posting on movies adapted from books. For more foreign movies, check out Caroline's World Cinema Series 2012 and Richard's monthly Foreign Film Festival round-up. As usual, there are numerous spoilers in this post.


On the last day of World War II in a small town somewhere in Poland, Polish exiles of war and the occupying Soviet forces confront the beginning of a new day and a new Poland. In this incendiary environment we find Home Army soldier Maciek Chelmicki, who has been ordered to assassinate an incoming commissar. But a mistake stalls his progress and leads him to Krystyna, a beautiful barmaid who gives him a glimpse of what his life could be. Gorgeously photographed and brilliantly performed, Ashes and Diamonds masterfully interweaves the fate of a nation with that of one man, resulting in one of the most important Polish films of all time.
(Synopsis from the Criterion Collection page. The film's Wikipedia page provides a more detailed plot line.)

Ashes and Diamonds is only the second film I’ve seen from director Andrej Wajda (the first was Katyń) but both of them are remarkably good. Because I’ve read the novel on which this is based the main focus of this post will be to look at changes from the book, commenting on what did and didn’t work for me. I highly recommend the Criterion Collection DVD which includes a 35-minute feature of interviews with Wadja, second director Janusz Morgenstern, and film critic Jerzy Plazewski. Also available from Criterion are two essays on the movie, one by Daniel Gerould, the other by Paul Coates.

In his essay for Criterion, Paul Coates claims “more Poles took Wajda’s film to heart than had embraced Andrzejewski’s novel”:

Did visuals offer more leeway for an ambiguity that could fool the censors, as Wajda himself has argued? Was Zbigniew Cybulski’s electrifying performance the key factor? Or was it Wajda’s transformation of Cybulski’s role into the undisputed focal point of the ironic tragedy whose twenty-four-hour period was the hinge connecting the end of one (world) war to the start of a new (civil) one? Perhaps the distinguished novelist Maria Dabrowska was right to say at the time that it told as much of the truth as could be told in the circumstances.

I don’t know whether the Coates claim is true but I wouldn’t doubt it. Two key storylines from the novel were cut for the film—the focus on the amorality of the Polish youth and Antony Kossecki’s haunted conscience for what he did in the concentration camp. Both of these storylines cast negative spotlights on some Polish nationals and add to the ambiguity on how to interpret Andrzejewski's novel. I fully understand the need to cut these in order to make the film a watchable length, but I think this would explain some of the possible disconnection with the novel. My contention in my post on the novel is that there are two major themes: the chaos in Poland as World War II ends and the judgment of how a man reacts during crisis situations. Underlying both themes are common elements that add to the ambiguity of the novel, such as the morality of actions taken or the disjunction between ideals and reality. There is still some ambiguity in the film—the assassination of innocent Polish workers by the resistance, the absurdity of Maciek’s mission, or the grasping Polish party aide. In addition, party Secretary Szczuka is painted with a very sympathetic brush (just as he is in the novel, although Wajda emphasizes different things in the movie). The other thing to keep in mind when comparing the novel and the movie is the difference a decade makes. Both essays linked above go into more detail on this but there were differing levels of censorship (and self-censorship) due to the change in political atmosphere. The additional interviews on the DVD also touch on this topic.

To stop my rambling I’ll look at the parts of the adaption that didn’t quite work for me and some that did. Any discussion on the “bad” side of that equation starts with the sunglasses Zbigniew Cybulski (as Chelmicki) wore. They are distracting. They are an anachronistic model. The reason for always wearing them, hinted at as something to do with time spent in the Warsaw sewers, makes little sense. I know it’s a minor point but anything that has me thinking about the absurdity of a wardrobe choice detracts from what else is happening on the screen.

The significant possible downside in this adaption, though, is the compression of the story into a 24-hour period. This compression helps build the sense of urgency for the assassination of the party official but it makes the love story between Chelmicki and Krystyna feel forced. The timeline of the book was spread out over several days, giving the two characters time to spend together and feels much more natural than making life-changing decisions after a quick romp in the sack. OK, I overstate the quickness of the change but not by much. Chelmicki’s love for Krystyna lies at the heart of his decision whether to assassinate Szczuka or leave the resistance, although Chelmicki comes to realize these choices aren't mutually exclusive. If his change of heart isn’t believable then the agony and deliberation resting on these decision feels labored.

On the side of things that worked for me, the acting by the major characters is strong. Ewa Krzyzewska plays Krystyna perfectly whether she’s the aloof bargirl who shuns relationships or the vulnerable lover. Waclaw Zastrzezynski as sympathetic party leader Szczuka and Adam Pawlikowski as the unsympathetic resistance lieutenant Andrzej hit the right notes in order to provide a full comparison and contrast between the two men. (I’ll have more on Zbigniew Cybulski’s Chelmicki in a minute.) Wajda’s use of parallels in the movie highlights the comparisons and contrasts between the two sides, adding to the feeling that both sides are trapped by history. One example focuses on the recollection of fallen friends by Chelmicki and Szczuka. The scene where Chelmicki does this, in the clip shown at the end of this post, is echoed with a similar one between Szcuzka and an aide—the aide brings a gramophone to the party leader’s room as they toast their fallen comrades. It’s a fine line Wajda walks at times like these, making opposing sides humane while avoiding moral equivalence. I’ve mentioned that the compression of the movie’s timeline helps heighten the tension in the movie but Wajda adds scenes that add to the anxiety, even in simple things like Chelmicki trying to recover a missing piece of his gun from under Krystyna's chair.

There are several points that lie in between the good and the bad for me. Wajda’s use of symbolism can be heavy-handed at times, but when it clicks it can be very powerful. The unstated tie-in of Szczuka as a father figure to Chelmicki works both sides of that fence at times while the use of the flaming shot glasses in the clip below proves to be a strong example of the effectiveness of the symbolism. I’ve also included the clip because it shows the good and the bad of Zbigniew Cybulski’s portrayal as Chelmicki. For most of the time Cybulski perfectly captures the combination of carefree youth with the torture of having to decide what direction he wants his life to take. Occasionally, though, the influence of James Dean surfaces too much in a few “look how much I’m feeling!” moments. You’ll see what I mean in the clip. Don’t get me wrong with my complaints, though, as the good points far outweigh the bad or questionable. Ashes and Diamonds has been one of my favorite book-to-movie combinations to read and watch since both are well done and the translation to screen—what was cut and what was changed—proves to be an interesting study.

The scene below may be one of the more famous clips from the movie: Maciek reminisces with Andrzej about their fallen friends while a Polish nationalist song is sung in the background. The song proves to be moving for the crowd, too, although that part comes just after the clip ends. I’ll include the quote from the book about the song since it dovetails nicely with the conversation:

The song, carried on the little childish voice, had pushed back time, had opened up the past now tragically lost in fear and platitudes, in lies and stupidity, in the fumes of alcohol, in easy love and easy money, in cloudy illusions and vain, blind griefs, in all this confused life which was leading to what? Remembrance seized them all. The shadows of the voices of the dead, of houses that no longer existed. The shadows of landscapes, or of their own fates. But no joy had emerged from those years. Life was continuing. But what did it carry with it? Loss or hope?

Wajda’s fans come together! We invite everyone related to the film industry and more to participate in the great artistic event of Wajda Art! Become a co-publisher of the incredible albums of Andrzej Wajda’s drawings. You’re wondering how the master of Polish film created his great works? Visit our website or Facebook profile and see how you can support us. The crowdfunding websites will start soon!