Winstonsdad and Richard are hosting Spanish Lit Month at their blogs this month. Stealing the archives idea from Simon through Lizzy I thought I would highlight three of the Spanish language books I’ve previously covered at this blog and one series of books.

Miguel de Unamuno has long been one of my favorite authors and I wholeheartedly recommend his novel Mist, a playful look at how literature represents and shapes man. I’ll include a quote from the protagonist’s dog, musing on man’s nature, getting to the heart of the book:

The Tree of Knowledge was by far the best and most impressive of the six books I have read by Pío Baroja. In lieu of a summary, I’ll include part of the overview I posted:

Eduardo Mendoza's The Truth About the Savolta Case evokes the past in this murder/mystery novel while providing a cautionary tale for post-Franco Spain by looking at a Barcelona in political, economic, and social turmoil at the end of World War I. It's a fun read and highlights how the past isn't necessarily that different from the present:

"There’s no way out for this country, even if it isn’t right for me to say so, being a foreigner. There are two major parties, in the classic sense of the word, conservatives and liberals, both of which support the monarchy and both of which take turns at being in power with skillful regularity. Neither party seems to have a well-defined program, just some vague general concepts. And even that handful of ambiguities, which constitutes their ideological skeleton, changes as conditions and opportunities change. I would say that both limit themselves to supplying concrete solutions to problems they raise, problems they suffocate, once they’re in power, without really solving them. After a few years or months, the old problem breaks through the improvised solution they’ve provided and causes a crisis. Then the party out of power takes the place of the party that took its place. And for the same reason."

I’m saving Benito Pérez Galdós for last in this post. I’m hoping to have a readalong in October for Fortunata and Jacinta. One of the characters from that novel, Francisco Torquemada, was provided his own spotlight in the Torquemada series of novels. In these posts I have linked to Dr. Rhian Davies and the The Pérez Galdós Editions Project. Dr. Davies has a very good summary of the Torquemada novels at the Project, which ends with this:

Check out the posts at Richard and Winstonsdad’s sites during July for their posts and links to other bloggers' posts during Spanish Language Lit Month. 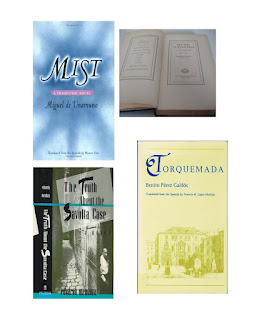 Having read the Unamuno and parts of the Baroja and Mendoza, all I can say is what a wonderful list. Looking forward to your Galdós readalong although I just read last night that one of the Spanish authors I'm reading and enjoying for Spanish Lit Month totally hated everything about Galdós' writing project for some reason. Kind of funny. Anyway, thanks for this overview--will link to it at the end of the week.

To tell you the truth, things haven't changed so much in Spain. In my opinion, and other people's as well, we still have the same problems: laziness, distrust of things from outside, envy of the people who have succeeded, and above all, a strange pride that preserves all those problems and more. That's why is such an embittered experience to read all those classics you've mentioned. Even though I loved Mist and The Tree, I haven't read these authors since high-school.

Thanks Richard. That is interesting about the one author...

Starla, I wonder how common those sentiments (or variations of them) are elsewhere.