The Truth about the Savolta Case 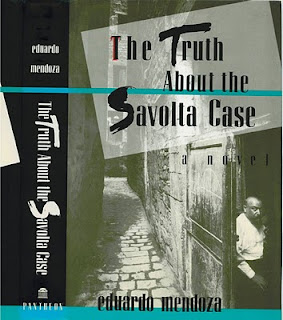 The Truth about the Savolta Case by Eduardo Mendoza
Translated from the Spanish by Alfred Mac Adam, Pantheon Books, 1992

Mendoza’s novel, released in 1975, is set in Barcelona at the end of World War I amid political, economic and social turmoil. When reading about the political movements during the early part of last century, such as here or in Baroja’s trilogy The Struggle for Life, it can be hard for me to connect because those times seem so different from now.

”There’s no way out for this country, even if it isn’t right for me to say so, being a foreigner. There are two major parties, in the classic sense of the word, conservatives and liberals, both of which support the monarchy and both of which take turns at being in power with skillful regularity. Neither party seems to have a well-defined program, just some vague general concepts. And even that handful of ambiguities, which constitutes their ideological skeleton, changes as conditions and opportunities change. I would say that both limit themselves to supplying concrete solutions to problems they raise, problems they suffocate, once they’re in power, without really solving them. After a few years or months, the old problem breaks through the improvised solution they’ve provided and causes a crisis. Then the party out of power takes the place of the party that took its place. And for the same reason.” (pages 82-83)

OK, so maybe they aren’t all that different. And that seems to be Mendoza’s message, using the past to anticipate the future. In looking at a post-Franco Spain, Mendoza presents past mayhem under the guise of solving a crime. Workers fomenting strikes at the Savolta factory (which manufactures war munitions) turn up injured or dead. Officers of the company are assassinated while a reporter, originally hired by the company to prepare a report about conditions at the plant, mysteriously dies. The reporter may or may not have sent a letter with revealing information.

To some extent, this sounds like standard murder/mystery fare. What glued me to the novel the first time was Mendoza’s approach in revealing the facts. The fun lay in figuring out what had already happened. A host of documents are presented piecemeal—court reports, newspaper clippings, letters, etc. A twin narrative emerges, focusing on one time period while filling in the gaps about the past (covered by the documents), followed by a straightforward narrative to end the book. On this re-reading I focused more on Mendoza’s message in looking at these incidents. In an interview, Mendoza lays out his approach: “In my novels I attempt to relate the past with a vision that we hold of it today. I lay aside important events [...] and stress other moments that are more relevant to our present. It is an evocation of the past from the perspective of the present.”

So what does Mendoza evoke from the past in looking at Barcelona during the ten-year period (off and on) beginning in 1917? It’s difficult to pick any one excerpt since there are many scenes to portray the turmoil in the city but I’ll select the descriptions and comments by the protagonist (Javier Miranda) returning from his honeymoon:

Returning to Barcelona put us face-to-face with a reality we’d almost forgotten. Being away made me more sensitive, so no sooner did I step out of the train than I noticed a tension in the air, the result of the crisis. The station was crowded with beggars and unemployed men eagerly offering their services to the travelers. Ragged children ran along the platforms stretching out their hands, peddlers cried out their wares, the Guardia Civil kept the crowds pouring off the trains in order and formed the immigrants into miserable squads. Ladies from charitable organizations followed by servants carrying baskets handed out bread to the needy. On the walls there was graffiti of all sorts, most of which called for violence and subversion. On the way home, we witnessed a small demonstration by workers demanding higher salaries. They stoned a car: a lady got out, blood running down her face; she screamed hysterically as she took refuge in a doorway. … After years and years of constant, cruel struggle, the antagonists (workers, owners, politicians, terrorists, and conspirators) had lost any sense of proportion, had forgotten why they were fighting, and had renounced any gains they might have made. More united by our antagonism and anguish than separated by ideological differences, we Spaniards were a confused throng climbing down an inverted Jacob’s ladder whose steps were revenge for revenge and whose plot was a confused skein of alliances, denunciations, reprisals, and betrayals that were taking us to the hell of intransigence founded on the fears and crimes engendered by despair. (pages 269-270)

This is one murder/mystery novel that pays off the more you know about the setting’s history. For a quick overview, see this Wikipedia entry, focusing on the sections on the Reign of Alfonso XIII and crisis of the system (1898 - 1923) and Primo de Rivera's dictatorship (1923 - 1930). The ineffectiveness of the state, whether it was the King, dictators, cabinet, or any other state body (like the police…OK, especially the police) fills the narrative at many levels. A cautionary tale for the post-Franco era, The Truth about the Savolta Case maps out what could happen based on what already had occurred.

Areas that bothered me upon first reading stood out more this time through. The naïve nature of the protagonist Javier Miranda grated on me. His blindness to his situation, which was clear to every other citizen in Barcelona, seemed a little too simplistic. Caught up in the basic things of life—work, love, survival—Miranda chooses to remain willfully blind to how he is being used for the gain of others. If Miranda (immaturity personified) and his wife (everything but innocence) are supposed to symbolize or provide metaphors for Spain, it seems a little heavy handed. Also, the straightforward revelation of many aspects of the case felt anticlimactic and too convenient after the complex building of the narrative.

Even with these reservations, I enjoyed the novel and recommend it (I believe the English translation is out of print but I see it occasionally in used book stores for around $10). The turmoil in Barcelona, especially the 1917-1920 timeframe focus here, still resonates today while providing the backdrop for and integral part of Mendoza’s story.

Email ThisBlogThis!Share to TwitterShare to FacebookShare to Pinterest
Labels: Eduardo Mendoza, The Truth about the Savolta Case