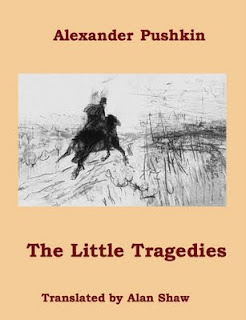 I finished Alexander Pushkin's The Little Tragedies, an e-book translated by Alan Shaw. The pieces included are "The Miserly Knight", "Mozart and Salieri", "The Stone Guest", and "Feast During the Plague".

I have posted on "Mozart and Salieri" earlier:

Pushkin does a wonderful job of embodying two disparate views of art in his characters. Salieri places art on a lofty plane, able to justify murder in order to “save” it. Mozart’s quote above is in direct contrast to everything Salieri has worked for and the esteem he desires. Pushkin also pushes the idea of the sacred accessible through the profane. Salieri’s asceticism in his personal life carries over to his music. His repugnance of all things corporeal limits his reach for something higher. Mozart wallows in his humanness, enjoying life and obtaining something Salieri recognizes as divine. ... [H]ighly recommended for happy idlers.

There is a marvelous recording of the play that uses Alan's translation in a five-part YouTube series.

The other three pieces don't consistently achieve the same level as "Mozart and Salieri" but they do have plenty of enjoyable moments. "The Stone Guest" presents a version of the Don Juan legend. As Alan points out in his Afterword (an extremely helpful analysis of the stories) lust is not the driving force of Don Juan as he is "lured by the thrill of the chase" instead. Pushkin goes out of his way to highlight Don Juan's excitement in illicit pursuit. The 'stone guest' turns out to be the statue of a lover's husband who was murdered by Don Juan. Just as the statue's physique exaggerates the physical attributes of the dead husband, Don Juan's mythology has likewise grown over the years. Pushkin's enigmatic Don Juan reflects some of the expected parts of the myth but adds some interesting twists as well.

"Feast During the Plague" might be the slightest of the stories but there remains plenty to chew over regarding its meaning(s). Well-to-do city dwellers attend a feast, enjoying their apparent exemption from the death that occurs around them. Walsingham, presiding over the feast, rebukes a priest as he seems to celebrate life. His outlook, though, appears to come at a cost. Walsingham's hymn to the plague is the high point of the piece, a moving celebration of life and all it entails:

All, all that threatens to destroy
Holds for the mortal heart a joy
Of inexplicable delight,
That seems to pledge eternity;
And happy he who in his plight
Has tasted that discovery.

"The Miserly Knight" is my favorite story after "Mozart and Salieri". The humorous opening scene, focusing on the poverty of the erstwhile knight, is followed up by a wonderful scene focusing on the knight's father in his money vault. While the son debases the ideal of a knight, his father mocks it with his language. The key to a money chest is compared to a sword, where sliding it into the lock gives as much pleasure, supposedly, as a knight plunging his sword into an opponent.

Alan has put together a wonderful publication. These may not be listed as part of Pushkin's major works but the additional information and context provided by Alan elevate their enjoyment. Highly recommended.

Great to have competing versions of these plays \ poems \ whatevers.

I would certainly put "Mozart and Salieri" among Pushkin's major works, but you are right that it does not always make that list for some reason.

I agree, I love it. Passed it on to my sister-in-law and I think she did as well.