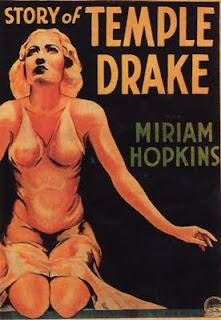 I want to mention the scheduled showing of The Story of Temple Drake (1933) on TCM at 8pm (Eastern) on September 14. Based on William Faulkner's Sanctuary, which he described as a "potboiler" (although how much he meant that is debatable), I'm anxious to see the version TCM will show. The movie, filmed pre-Hays code, was supposedly altered for release and again post-code.

I've never been a big fan of Sanctuary but I probably need to revisit it--my memory of reading it almost 30 years ago was that it was a warm-up for Light in August. The movie, though, can be hard to find at times which is why I wanted to highlight this airing.