Radio Prague International: The Czech Books You Must Read series

Kafka, Čapek, Kundera and Havel, these are all world renowned names, but what about all the others? How well are Czech authors actually known abroad? Can you find a bookshop in Berlin, Madrid, Moscow, Paris or New York that aside from classics such as The Good Soldier Švejk also sell the works of contemporary Czech authors? At Radio Prague International we have decided to map out the popularity and availability of Czech books abroad and find out which books have been translated into international languages such as English, German, Russian, Spanish and French. At the same time we will be providing our foreign audience with the opportunity to get acquainted with past and present Czech literary jewels.

The aim of the project is to give you a list of arguably the best and most popular Czech novels and poetry ever written, presenting not only the established classics, but also introducing the leading contemporary authors.

I've had a link to Radio Prague International's Culture & Literature posts in my sidebar for quite a while, but it has been some time since I had visited it. Many thanks to Michael Orthofer at his The Literary Saloon blog for noting that radio.cz had begun a series titled The Czech Books You Must Read, entries of which can be found here.

So far they have included The Good Soldier Švejk by Jaroslav Hašek, The Grandmother by Božena Němcová, and Marketa Lazarová by Vladislav Vančura. I can highly recommend the first and last of these three, and I look forward to exploring The Grandmother soon. The entry for Švejk includes an interview with Abagail Weil, who is working on a book about Hašek (now that I want to read), and it is noted that a new translation of Švejk by Gerald Tuner will be due soon from Karolinum Press. I had wanted to revisit the book, and that seems like a great opportunity to do so.

If you're interested in finding some great books to read in translation, keep up with the series! 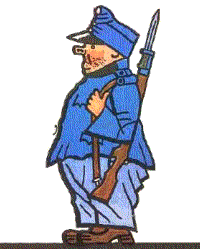 Illustration of The Good Soldier Švejk by Josef Lada at Wikipedia
Posted by Dwight at 10:22 AM