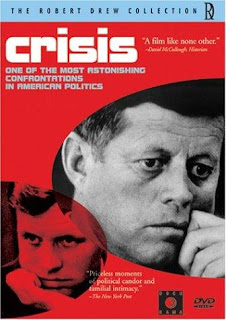 When Governor George Wallace literally stands in the schoolhouse door to block the admittance of two African-American students to the all-white University of Alabama in June 1963, President Kennedy is forced to decide whether to use the power of the presidency to back racial equality.

“Crisis” captures events from all sides, using the cinema verite techniques pioneered by Drew Associates. The cameras follow the President, Attorney General Robert F. Kennedy, Wallace, and the two students, Vivian Malone and James Hood, as the crisis unfolds and up through its dramatic climax, including rare scenes of decision-making inside the Oval Office.

This TV movie is a good introduction to the segregation of the University of Alabama in June 1963. The main characters are Alabama Governor George Wallace, President John Kennedy, Attorney General Robert Kennedy, and students Vivian Malone and James Hood. The students are essentially pawns in a larger game of national vs. state policy and the carrying out of a court order for the University of Alabama to allow black students to enroll. Wallace campaigned on keeping the schools segregated and was upholding his promise—Alabama was the last state to have segregated public universities.

Despite Deputy Attorney General Nicholas Katzenbach's desire not to make a stage production out of the confrontation, the actual moment was essentially theater intended for the public, everyone's part scripted to further their message. Wallace knew he was going to lose this confrontation, and Kennedy did his part to let Wallace save face in defeat. The tension came from neither side knowing exactly how the other would act. What helped was the desire of both sides to keep this peaceful, and to his credit, Wallace played a large part in that. Early in the movie he charges his staff to avoid violence, sealing off the university from outsiders in order to avoid violence like the previous year at the University of Mississippi. You'll notice a lack of crowds at Foster Auditorium other than state troopers, policemen, and the press. And later the nationalized Alabama National Guard.

Even with the softening of the setting, it doesn't lessen the tension, especially for Malone and Hood. Their grace under pressure is extraordinary. The brief interviews shown with them answering questions from the press and preparing for enrollment is a testament to their fortitude.

The two confrontations between Katzenbach and Wallace are shown, the second one resulting in Wallace backing down and allowing the court order to be fulfilled. With D.A. Pennebaker filming in Washington and Richard Leacock handling the camera in Alabama, we see what is happening simultaneously in both locations. This also gives rise to one moment of levity when Robert Kennedy puts his three-year-old daughter Kerry on the phone with Katzenbach. For a moment, the stress melts from Nick's face as he chats with the child.

After the resolution in Tuscaloosa, we see David McGlathery walking unaccompanied to register at the University of Alabama—Huntsville two days after Wallace's stand. I wish more had been said about McGlathery since he was the first black to attempt to integrate the University of Alabama system. To say the movie brought back a lot of memories for me is slightly misleading...I was only 1 year old when the events here unfolded. But the settings around Montgomery and Tuscaloosa are part of my youth, and Wallace was a dominant figure for decades. The adults showing their appreciation for Wallace were figuratively like many of my neighbors. I remember my fifth-grade teacher crying when the news broke that Wallace had been shot in 1972. Plus, I don't know how many times I've passed through those doors at Foster Auditorium while attending Alabama, but I remember the first time I did, looking around to compare with the pictures and footage I saw of these moments.

I say the movie is a good introduction because there is so much more to the story than just the lead-up to that one day. Wallace is a fascinating character and worth watching the higher-rated movies about him and reading about his personal and political lives. The Washington characters have plenty of coverage, although I will recommend finding out more on Nicholas Katzenbach and his career. And, at the center of the storm, the students deserve reading about for their role and how they played it. Very highly recommended.

The movie is currently available to Hulu Live subscribers (I don't know for how long), or for a fee at Amazon Prime or on YouTube. The movie is also one of the features in The Criterion Collection's The Kennedy Films of Robert Drew & Associates disc.