The Elements by Euclid 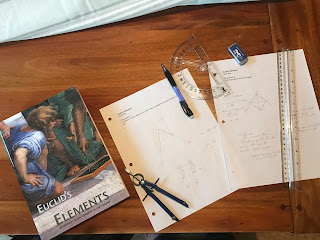 And now for something completely different...

I've been slowly working my way through The Elements by Euclid and recreating the propositions. What a strange, nerdy thing to do, right? I'm not completely sure why I decided to do this, but I'm thoroughly enjoying it. At the rate I'm going, it will take until the middle of the year to work through the book, but that's fine with me.

A summary of Euclid's contribution to mathematics from the Ancient History Encyclopedia:


Euclid did not originate most of the ideas in The Elements. His contribution was fourfold:


St. Andrew University's page on Euclid of Alexandria adds "The book was a compilation of knowledge that became the centre of mathematical teaching for 2000 years. Probably no results in The Elements were first proved by Euclid but the organisation of the material and its exposition are certainly due to him. In fact there is ample evidence that Euclid is using earlier textbooks as he writes The Elements since he introduces quite a number of definitions which are never used such as that of an oblong, a rhombus, and a rhomboid." (Their site also has a lot of links and additional material on Euclid.)

I've been using the Green Lion Press edition (Euclid's Elements) and a couple of online resources to help me through the book. The Green Lion Press edition comes highly recommended and I agree with all the positive things people have said about it. It includes the "complete unabridged text of all thirteen books of Euclid's Elements in T. L. Heath's translation with minor corrections to text and translation, along with introductions, terminology and biographical notes, bibliography, index and glossary." It's a wonderful edition that I highly recommend.

There are many online sites and tools for working through The Elements, so I'll only list the two I've been using. The first is at Furman University's site and compiled by John T. Poole. What I love about this tool is that it walks you through the propositions, giving visual aids to help you understand the text step by step. (Walk through Book One's Proposition Nine as an example and you'll see what I mean.) Everything is clear and since the T. L. Heath translation is used, it is consistent with the text I'm using. I find his statement that "Every interested person, ninth grade student to ninety year old retiree, should be able to read most, if not all, of the material" to be true in my case.

The second site I use is at Clark University and compiled by David E. Joyce. There is additional information and techniques shown that help me understand the propositions better. Weaknesses in Euclid's logic are provided as well as help in construction of the propositions. See his page on Book One Proposition Nine for comparison with the Furman site. I find both sites extremely helpful when used in tandem.

You can understand the propositions fine by following along in the book or the sites, but I wanted to get the most out of it and recreate the steps. If you decide to work through them yourself, you can get by with a simple geometry set (such as this one by Mr. Pen) for everything I've come to so far. I'm awful with a compass, though, so I also ordered a bow compass (this one by Mr. Pen, also, does fine).

In The Gargoyle Hunters, the author John Freeman Gill talks about meeting artists across time when you contemplate their work, which I find perfectly describes how I feel when working through the beauty and logic in the proofs of these propositions. I'm sure not everyone will enjoy it to the same extent as I am. Regardless, I would give The Elements one my highest recommendations.
Posted by Dwight at 7:17 AM