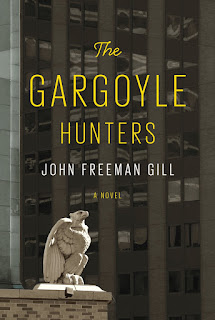 The city had a rich, complex life long before you ever came along and started having your own personal little responses to it, Griffin. It’s bigger than you. … The lives lived by generations of New Yorkers in and around a historic building give it all kinds of layers of collective meaning—a patina of memory and grime and experience, really—that you can see, and even feel, if you open yourself to it. (30)

I read this book last year when it was released and intended to post a note on it. Better late than never, I guess. This book got some fanfare in major media when released, but I didn't see much from book bloggers about it. While it may be a little uneven, the parts I enjoyed have stuck with me and I thought worth passing on.

Set in mid-1970's crumbling New York City, the book centers on thirteen-year old Griffin Watts attempting to deal with his fractured family. Caught between warring parents just divorced, Griffin tries to simultaneously hold the family together while protecting his mom from a possibly abusive dad. Part of Griffin's plan is to understand his dad better, especially since he doesn't know exactly what it is he does for a living. Griffin's dad, though, gets easily exasperated by his son, especially when Griffin doesn't share his fixation on the beauty and meaning of architecture to the same extent.

“I don’t know how this happened to you,” he said. “But you, son, are going to learn to look up. You are not going to be another one of those blinkered goddamn New Yorkers who walk around town staring at their shoes, or worse, have their eyes so fixed on whatever goal they’re hurrying toward that they never see the city around them. You are not going to join that complacent army of blind men who went and let a civic cathedral like Penn Station get smashed to pieces right under our noses.” (31)

Unfortunately for Mr. Watts (Griffin's dad), there are plenty of that "complacent army" passively allowing the city to be overhauled. Watts' front as an antiques dealer hides an illicit business of scavenging sculptures and fixtures (including gargoyles) from buildings marked for remodeling or destruction. Watts' architectural education of Griffin starts innocently enough, cleaning molding and helping out around the office, but soon Griffin is assisting in the theft of sculptures off buildings all around the city, risking life and limb in some unconventional bonding moments. His dad's outlook toward learning about buildings and details doesn't initially seem that far out of the mainstream:

“People who study academic lingo learn facts about ornament, but the only way you can really come to know the ornament is by feeling its contours for yourself.” He fixed me with those green eyes of his. “If you do that, Griffin, the whole city will open up to you. You’ll find that you’re suddenly seeing ornamental sculpture, really wonderful stuff you never noticed before, on buildings all over town. You’ll learn to look up.” (47)

It's that outlook that leads to my favorite concept Watts tries to impart: the connection across time that buildings can provide. Or as Watts beautifully puts it,

“The bridge of time is very poignant,” he told me. “I think about the immigrant carvers who came over here and did this work on people’s homes—itinerant nobodies, many of them, with no stable homes of their own—and I meet them across time.” (92)

Griffin realizes that his dad's concerns are really a mania...an obsession that soon has Griffin imperiling his life to help his dad. One of Watts' assistants perceptively describes to Griffin what this fixation has done to his dad: “It [collecting] starts out as love. But it becomes something much more grasping and corrosive.”

At the center of most of the book is New York City and the 1970s. The city, caught between bankruptcy and renovation at this time, comes alive not just in Griffin's eyes but for the reader, too. Headlines of the day set the mood that seems reflected in many of the characters, and a lingering mystery—who stole an entire building from the Landmarks Preservation Commission—is given a possible solution.

While the relationship between Griffin and his dad takes center stage, the other people in his life provide important roles beyond just comic relief. His artist mom takes in boarders like some people take in stray animals. His sister seems distracted and Griffin assumes the worst when he tries to solve the mystery of her secret life. Griffin's friends and social life leave a lot to be desired, but then that seems to be the rule for most adolescents. As I mentioned earlier, the book can be uneven at times, and something is lost when the story leaves the city. Even so, I enjoyed it, both for the entertaining look back as well as for the message of possible connections across time.

The Prologue to the book: "Ghosts of New York"

An interview with Gill at the Los Angeles Review of Books

An interview at Business Insider; also an excerpt

Very strange...I left a message a couple of days ago but it's not showing up now. At the risk of having two comments...

And Griffin reminds me of Tom Henderson of the King Dork books, an anti-Holden Caulfield. I quite enjoyed it.