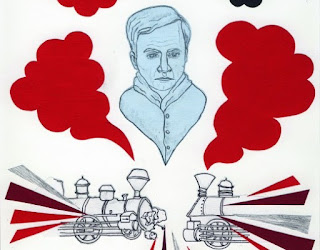 
The May 2018 edition of e-flux contains the Andrei Platonov story "Immortality," translated by Lisa Hayden and Robert Chandler. It is a fairly simple but moving story of the railway station chief Emmanuil Semyonovich Levin tirelessly working to keep trains running on schedule. In addition to the difficulty of his work, he has to manage incompetent and belligerent employees. He has a dedicated household worker, but her skills are limited. Levin sacrifices time with his family, sleep, and food in order to make sure things run as scheduled. While Levin could be held up as a Soviet hero, his co-workers are far from ideal. There's plenty of humor in Levin trying to help these workers in their personal lives so they will work better on the job, but I got the feeling Platonov was winking at the reader and saying there would always be excuses for them not to improve. Amid the humor, though, lies a feeling of pathos for Levin and other like him who are giving everything for the state.

A lonely man, Levin rarely saw in person those faraway people for whom he worked. “That’s what my daughter will be like soon,” Levin decided for himself. “She’ll be even better, happier … But the station chiefs won’t be like me. They’ll sleep at night and go away on vacation, and they’ll live in a family, with a wife, among their own dear children.”

Also in the same edition is the article "Articulations of (Socialist) Realism: Lukács, Platonov, Shklovsky" by Robert Bird that provides background information on the story and looks at how Platonov fit into historical socialist literature of the time. "Immortality" was one of two stories Platonov was commissioned to write in 1935 for a project titled “People of the Railway Empire” despite running afoul of Stalin several times. Regarding the realism of "Immortality," Platonov had said, “In this story there are no facts that fail to correspond to reality at least in a small degree, and there are no facts copying reality." Bird looks at how that fits in with realism as Georg Lukács and others understood it, and how they thought realism should "be retooled for the aims of socialism."

I missed the publication of this story in e-Flux, so many thanks to Cynthia Haven at The Book Haven for her post that brought it to my attention.

One of Platonov's most characteristic images, always connected in one way or another to the theme of revolution and utopia, is that of the train or locomotive. In 1922, in a letter to his wife, Platonov described an experience from the time of the Civil War: 'Even though I had not yet completed technical school, I was hurriedly put on a locomotive to help the driver. The remark about the revolution being the locomotive of history was transformed inside me into a feeling that was strange and good: remembering this sentence, I worked very diligently on the locomotive . . . ' The sentence the young Platonov remembers is from Karl Marx: 'Revolutions are the locomotives of history.' By 1927, however, Platonov had grown disenchanted—a disenchantment symbolized in Chevengur by the catastrophic collision between two trains that takes up most of the chapter published in this issue of Asymptote.

I've already linked the article "Platonov's Chevengur: The Ambivalent Space" by Natalia Poltavtseva, but wanted to highlight it again since it is helpful in understanding Platonov and his writing

Trains play important roles in Platonov's writing. My post on the train wreck in Chevengur.

I'm very glad to hear that you've been enjoying Platonov and that you found "Immortality" moving. I did, too, it's a beautiful story.

It is. And deceptively simple.

I'm just sorry I didn't catch it earlier, but I'm glad I found it now and wanted to pass it on. Glad to see your work!

Thanks for posting on this, Dwight. I think I'm ready to renew my acquaintance with Platonov, and these all sound like good places to start and/or supplement Round Two.

So do I Richard...so do I. I'm glad to see more translations of his work are in the works.