Being There by Jerzy Kosinski 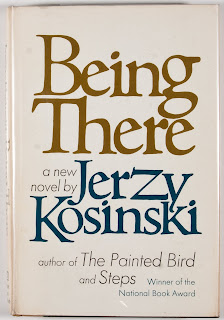 Being There by Jerzy Kosinski
Harcourt Brace Jovanovich, Inc.: 1970

A few months ago I watched one of my favorite movies, Being There (1979), and realized I had never read Kosinski's novel on which he based his screenplay. If you're unfamiliar with the storyline, Chance is a simple-minded man living at the townhouse of a wealthy, old businessman. Chance's mother used to work for the old man, and when she died he was allowed to live in the house and tend the garden. When his benefactor dies, Chance is not mentioned in the old man's will, nor is there a record of him anywhere. Turned out from the house, he wanders the streets and is hit by a car belonging to business tycoon Ben Rand. In order to avoid legal unpleasantries, Chance is taken to Ben's house. Ben and his wife, Elizabeth Eve (EE) find Chance refreshing and let him stay in their house. In addition to his businesses, Ben is a powerful political player and friends with the U.S. president. Chance meets the president and during a discussion on the economy his talk of tending a garden is misinterpreted as a parable on how the president should handle things. The president mentions the "wisdom" of Chance during a speech and the gardener is propelled into the political and social spotlight. Chance's simple utterances are treated as deep thoughts and shrewd advice, and after Ben's death, key political leaders look at drafting Chance for the next presidential election.

Chance's mindset comes from his two loves, television and gardening, although there can be significant differences between the two beyond the obvious:

The set created its own light, its own color, its own time. It did not follow the law of gravity that forever bent all plants downward. Everything on TV was tangled and mixed and yet smoothed out: night and day, bit and small, tough and brittle, soft and rough, hot and cold, far and near. In this colored world of television, gardening was the white cane of a blind man.

By changing the channel he could change himself. He could go through phases, as garden plants went through phases, but he could change as rapidly as he wished by twisting the dial backward and forward. In some cases he could spread out into the screen without stopping, just as on TV people spread out into the screen. By turning the dial, Chance could bring others inside his eyelids. Thus he came to believe that it was he, Chance, and no one else, who made himself be. (5-6, 1970 hardcover edition)

The book conveys an additional depth to Chance that the movie can't show, allowing the reader to see a certain amount of reasoning when he mimics behavior he has seen on television.

Mr. Franklin shuffled the papers on the desk and drew out a page filled with fine print. “It’s a simple formality,” he said, handing the paper to Chance. “Would you be kind enough to read it now and—if you agree to it—to sign it where indicated?”

Chance picked up the paper. He held it in both hands and stared at it. He tried to calculate the time needed to read a page. On TV the time it took people to read legal papers varied. Chance knew that he should not reveal that he could not read or write. On TV programs people who did not know how to read or write were often mocked and ridiculed. He assumed a look of concentration, wrinkling his brow, scowling, now holding his chin between the thumb and forefinger of his hand. “I can’t sign it,” he said returning the sheet to the lawyer. “I just can’t.”

“I see,” Mr. Franklin said. “You mean therefore that you refuse to withdraw your claim?”

The book allows additional insights into the workings of Chance's mind, helping explain some of his behavior. For example, it's noted that people talked to Chance he would repeat parts of their own sentences, a practice he had seen on TV. Of course people thought this meant he was listening intently, understanding what they were saying even though he usually didn't. Still, this would draw people closer to him, help them feel relaxed and confide more to him. A good example of this is when he was at a party talking with Skrapinov, the Soviet ambassador to the UN.

Skrapinov suddenly bent toward him. “Tell me, Mr. Gardiner, do you by any chance like Krylov’s fables? I ask this because you have that certain Krylovian touch.”

Chance looked around and saw that he and Skrapinov were being filmed by cameramen. “Krylovian touch? Do I really?” he asked and smiled.

“I knew it, I knew it!” Skrapinov almost shouted. “So you know Krylov!” The Ambassador paused and then spoke rapidly in another language. The words sounded soft, and the Ambassador’s features took on the look of an animal. Chance, who had never been addressed in a foreign language, raised his eyebrows and then laughed. The Ambassador looked astonished. “So…so! I was correct, wasn’t I? You do know your Krylov in Russian, don’t you? Mr. Gardiner, I must confess that I suspected as much all along. I know an educated man when I meet one.” Chance was about to deny it when it when the Ambassador winked. “I appreciate your discretion, my friend.”

I love that touch since Being There is itself a fable, where people hear what they want to hear and believe what they want to believe. Most of the interactions between people turn out to be superficial...they might just as well be watching television instead of having a real person in front of them. The two sex scenes complement this message, where partners are present but unnecessary for masturbatory pleasure.

Chance succeeds just by "being there," a blank screen for others to project their self-absorption. As a critique of our culture, it works well. There are biblical allusions (Chance forced out of the garden, a potential mate named Eve), but there doesn't seem to be a payoff to this set-up. As minor notes, there are times the book feels slight while other parts feel repetitious. Even so, I enjoyed the book quite a bit I'm glad I decided to read it.

It's difficult to write about the book without mentioning the charges against Kosinski for plagiarizing Tadeusz Dolega-Mostowicz's 1932 novel Kariera Nikodema Dyzmy (Nikodem Dyzma's Career). I can't speak to this directly since I don't believe there is an English translation of the novel. Given the plot in the above link, there are some strong similarities but also some important differences. I have seen the 2002 movie Kariera Nikodema Dyzmy (with English subtitles), but it has quite a few differences from the novel's plot listed above, too, so I don't feel comfortable using the movie as a basis of comparison. One important point about Nikos (Nikosia) in this film adaptation is that he isn't simple-minded (sorry if that isn't politically correct) like Chance. It struck me that Nikos was a common man with an average intelligence, able to rise to a level of importance inconsistent with what we'd expect, although he does seem to be a quick study. Again, I'm not sure how reliable the movie is to the Polish novel but wanted to note it. And I would definitely buy a copy if someone decided to publish an English translation. (Subtlety has never been a strong point for me.)

Update: Regarding Tadeusz Dolega-Mostowicz's book, there's a wonderful use of the main character in this 1994 interview with Zbigniew Herbert, showing how his name has become synonymous with opportunism: "I do not quite understand why Michnik evokes so much disappointment and irritation. His is a classic example of a communist Dyzma. The depressing story of a talented youngster. People now ask, how does his heroic youth relate to what he is doing now? He seems to be sliding down into feverish activism. One perceives here the cynicism of the admirers of Macchiavelli, as well as common nihilism." The related footnote says that Dyzma was "an unscrupulous opportunist."

Email ThisBlogThis!Share to TwitterShare to FacebookShare to Pinterest
Labels: Being There, Jerzy Kosinski