To Know a Fly by Vincent G. Dethier 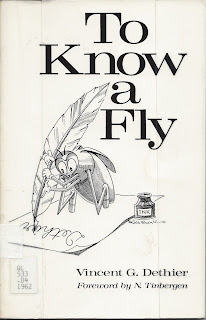 Although small children have taboos against stepping on ants because such actions are said to bring on rain, there has never seemed to be a taboo against pulling off the legs or wings of flies. Most children eventually outgrow this behavior. Those who do not either come to a bad end or become biologists. (2)

In the forward, N. Tinbergen looks at the distance that had grown between scientists and the public (keep in mind this is in 1962) because the knowledge had become incredibly detailed and technology techniques so specialized. Tinbergen notes that outstanding researcher Vincent Dethier's gift of clear communication helps bridge that gap, especially in works like To Know a Fly, and I have to agree. This book is a delight to read, a time-capsule look into a branch of scientific study and scientific life as it stood over 50 years ago.

Vincent Dethier was a scientist in several fields over his career, but it was his work in entomology that he is best known for. His writings went beyond academic papers and industry-related books, including works on natural history for the general reader as well as humor and children's books. To Know a Fly could be described as a combination of those last three categories, with Dethier detailing some of the work he does as a researcher. He lays out the concerns, discoveries, experiments, and observations in his work with flies, engaging the reader all through the different areas in a lively, anecdotal manner.

Some of the areas he features highlight the ingenuity in developing experiments, coming up with ways to measure the behavior of flies, especially in regard to their senses and feeding habits. As Dethier puts it, "An experiment is a scientist's way of asking nature a question." The most obvious problem when it comes to flies is the subjects' size. The resourceful and innovative ways Dethier and his lab partners develop experiments, despite that issue, portrays the scientific method in action. This is conveyed in a humorous, droll manner, and also demonstrating his claim that properly conducting an experiment can be "an adventure, and expedition, a conquest."

The book can be read and understood from ages 10 and up, although adults would probably appreciate it the most. More than just a cultural artifact from over fifty years ago, Dethier succeeds in bridging the "gap" between scientists and nonscientists to make some of the scientist's work understood and appreciated. As he mentions in the closing, something as insignificant as a fly plays a role in our universe. Demonstrating the work done to unravel the mysteries of a fly, Dethier helps the reader appreciate both nature and those working to understand it.

The instrument of a scientist's destiny may be many things from the ultimate space of the farthest reaches of the universe to the ultimate particles of matter, and all things in between, not excepting man himself. It is of this the scientist partakes. A fly is just as much in the scheme of things as man. No less a person than St. Augustine remarked in the Fourth Century: "For it is inquired, what causes those members so diminutive to grow, what leads so minute a body here and there according to its natural appetite, what moves its feet in numerical order when it is running, what regulates and gives vibrations to its wings when flying? This thing whatever it is in so small a creature towers up so predominantly to one well considering, that it excels any lightning flashing upon the eyes." To know the fly is to share a bit in the sublimity of Knowledge. That is the challenge and the joy of science. (118-9)