So that when later I heard people say “Oh Big Sur must be beautiful!” I gulp to wonder why it has the reputation of being beautiful above and beyond its fearfulness, its Blakean groaning roughrock Creation throes, those vistas when you drive the coast highway on a sunny day opening up the eye for miles of horrible washing sawing.
Jack Kerouac—Big Sur (1962)

Big Sur is one of my favorite getaways. I got the chance for a solo trip last weekend and the toll taken by the elements on the area over the past couple of years limited what I had hoped to do. I drove down early Saturday morning before the crowds of tourists wind their way down Highway 1 and was able to hike some of the few open trails in the area. Many were closed from a combination of the Soberanes Fire of a couple of years ago and rain from last spring and this winter, a combination of a timeless, elemental flux.

Since so many of the trails and beaches I wanted to visit were closed, I decided to stop at a pullout in Garrapatas State Park and walk out to one of the vista points. I noticed on the way south earlier that morning that the state had improved many of the coastal access points and I wanted to take advantage of the development. As I walked across the highway and down the narrow trail toward the cliffs, a guy came running up to me and said, "My friend has just fallen. If you see anything in the water, please let us know." I didn't have time to respond before he was off, so I continued heading out toward the coast. The surf is captured in the above video, 12-15 foot waves with an occasional 20-footer. While there (for about 45 minutes), many rangers, firemen, lifeguards, and other rescue people showed up on the scene and positioned themselves to locate the fallen friend. Seeing the personnel go through the rescue drills was just as dispiriting as the individual event, realizing they had done this dozens of times before and had a protocol they instinctively followed in order to spot a body in the water. There are many articles online about the event, but I'll just link this one.

There are a few literary works that capture the area for me, my favorite being some of Robinson Jeffers' poems. Last week's encounter, however, reminded me more of Jack Kerouac in Big Sur. I've never consistently connected with Kerouac, but if I had to pick one work I liked the best it would be this short novel. If you haven't read it, Big Sur follows Kerouac a few years after On the Road had been published (and fourteen years after the events in the book) as he's trying to handle the fame of his book as well as his inability to control himself, especially with alcohol. Kerouac's mental deterioration coincides with his visits to Lawrence Ferlinghetti's cabin in Big Sur. His isolation, exacerbated by the insignificance he feels in comparison to nature's power brings on a mental and physical breakdown. The poem he wrote while in Big Sur, "Sea: Sounds of the Pacific Ocean at Big Sur," echoes the parts of the novel comparing man's transience to nature's permanence, one of the many tensions in the book such as image vs. reality and beauty vs. hazard.

There are parts of the novel that I have recalled when visiting the area, though, and last Saturday was one of those moments. The simultaneously exhibited beauty and fearfulness of the area had never been on clearer display. 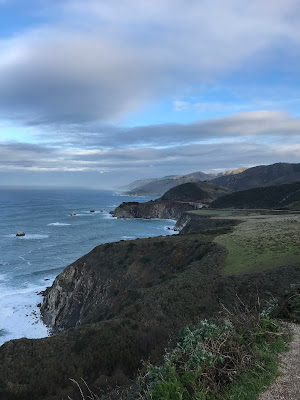 i bicycled thru there 57 years ago and it was truly a spectacular place... we stopped at San Simeon and toured Hearst Castle: crazy expenditure

That's brave to bicycle along there, and definitely something to remember.
Parts of Highway 1 had been closed for a while so I wanted to see how things stood now that it was open. Half the trails at Pfeiffer Big Sur State Park are closed, but they're hoping to have many of them open later this year.
Unfortunately a large stretch of Andrew Molera State Park was wiped out, and I don't know what they're plans are for it.