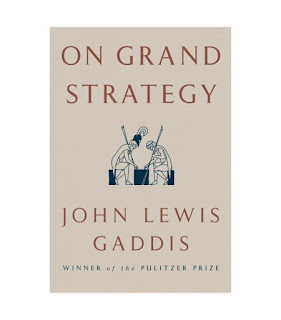 John Lewis Gaddis is the Robert A. Lovett Professor of Military & Naval History at Yale University. He is best known as an author specializing in the Cold War and grand strategy (six of the ten books shown at his faculty page have "Cold War" in the title) and for founding the Brady Johnson Program in Grand Strategy at Yale. He looks at "grand strategy" as "The alignment of potentially infinite aspirations with necessarily limited capabilities." There are other considerations and additional trade-offs to consider, but the leaders he lauds prove to be successful in balancing (or aligning) wants and desires with resources and potential. Gaddis begins with Isaiah Berlin's essay (and later short book) "The Hedgehog and the Fox." Where Berlin used the two animals to evaluate writers, Gaddis uses the dichotomy to look at leaders. Successful leaders combine the two animals' seemingly mutually exclusive traits, hedgehogs and their single central vision balanced with the pursuit by foxes of many ends.

The book considers examples of statesmanship, successes and failures, looking at the lessons that can be drawn from them across the millennia and settings. Those that failed at some point, such as Xerxes, Philip II of Spain, or Napoleon, were unable to adapt to changing conditions and resources, single-mindedly pursuing their goal without taking into account resources and capabilities. Those more successful, his examples include Octavian, Elizabeth I, and Lincoln, maintained their focus on an objective while tailoring tactics to reflect changing resources and priorities, respecting time, space, and scale in pursuing their goals. Being flexible, creative, and in tune to reality greatly increases their chances of success.

Gaddis looks at various competing ideas, such as the polarities of souls and states as articulated through Augustine and Machiavelli, respectively, and many of the chapters pair leaders, sometimes combining history and literature, to see how they balanced desires and resources. Napoleon, for example, is viewed through the lens of Carl von Clausewitz's On War and Tolstoy's War and Peace. In the case of those two writers, Gaddis stresses their regard for both theory and practice “without enslaving themselves to either,” and not confusing numerous ends with finite means. Xerxes' failed invasion of Greece, ignoring his uncle Artabanus' advice on lurking dangers, provides another example.

But Xerxes failed, as is the habit of hedgehogs, to establish a proper relationship between his ends and his means. Because ends exist only in the imagination, they can be infinite: a throne on the moon, perhaps, with a great view. Means, though, are stubbornly finite: they’re boots on the ground, ships in the sea, and the bodies required to fill them. Ends and means have to connect if anything is to happen. They’re never, however, interchangeable.

These character studies are thick with irony, with lessons to be learned from both the successes and the failures. In looking at the syllabuses (in the links below), I see this book is only a brief introduction to the grand strategies course, but a potentially fruitful one. Gaddis looks at his sources and characters with a discerning eye. He's able to praise aspects of Clausewitz's On War while at the same time agreeing with Sir Michael Howard on its “infuriating incoherence.” Here's an example, providing a glimpse at the need for balancing polarities:

Clausewitz died in 1831 before finishing On War, leaving us with a huge, unwieldy, and contradictory book, a close reading of which, I warn my students, risks mental disorientation: you can wind up unsure of what he said and with doubts, even, about who you are. Tolstoy did finish War and Peace, in 1868, but with little clearer sense of what he'd accomplished: "It is not a novel, still less an epic poem, still less a historical chronicle. War and Peace is what the author wanted and was able to express, in the form in which it is expressed." [Quote is from "A Few Words Apropos of the Book War and Peace] Isaiah Berlin detects in Tolstoy's evasiveness "a tormenting inner conflict"—like the results of too carefully reading Clausewitz?—between the "delusive experience of free will" and "the reality of inexorable historical determinism." But what if Clausewitz and Tolstoy were wrestling with contradictions—perhaps even relishing the contest—rather than agonizing over them?

These analytical studies, using a mixture of classics, philosophers, and statesmen, will frustrate anyone seeking an easy way to develop a strategic plan. There are so many ideas to keep in mind, many of them nebulous. What the reader gets is a blueprint for approaching the development of solutions, not a shortcut to the solution itself. The source material (some of which are listed in my notes link below) deserve further reading in order to appreciate Gaddis' summary of complex works and events. Gaddis' informal style delivers an insightful analysis of history and ideas, providing a splendid introduction to this subject. Very highly recommended.


Links:
- Here are previous syllabuses for the Grand Strategy Course at Yale. The seminar looks daunting.

Gaddis' lecture What is Grand Strategy?, delivered February 26, 2009 at Duke University. In it he examined why he believed there was a "grand strategy deficit," the impetus for founding the Yale grand strategy seminar, and how the seminar was meant to "encompass three schools: a school of the classics, a school of surprise, and a school of responsibility." His list of "chroniclers and practitioners of grand strategy" in the seminar make repeated appearances in On Grand Strategy, and he details what students in the courses should learn. As one student put it (and Gaddis agrees), "You're teaching us how to fail." See the link above for syllabuses from previous seminars.

- For an insightful and detailed book review, I highly recommend Henry Suckow-Ziemer's article at the Yale Review of International Studies

- Gaddis' Wikipedia page, which has links to some of his articles

- Some of the books and articles listed in the Notes section of the book
Posted by Dwight at 5:51 AM