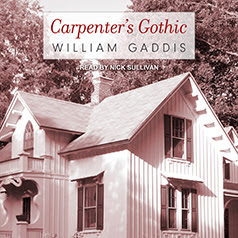 A few years back I posted a brief note on Nick Sullivan's narration of two of William Gaddis' novels. Mr. Sullivan was kind enough to email me that his narration of Gaddis' Carpenter's Gothic had just been released. Having had a chance to listen to it, I wanted to let others know it is another remarkable performance. The style is similar to J R, with unattributed characters' speech mingled with a narrator's voice (with a much shorter length and fewer characters). Sullivan once again masterfully animates the voices and captures the emotions of the many characters. Although Carpenter's Gothic is not one of my favorite of Gaddis' novels (more on that in a moment), I highly recommend Sullivan's narration whether you have read the novel or not. I don't think I'm overstating things when I say that listening to his narration will help you learn how to read Gaddis and get the most out of the experience.

Regarding Carpenter's Gothic, I guess I have a complicated relationship with it. I read it upon its release, my first exposure to Gaddis. Probably adding to my initial enjoyment was having just moved from near one of the towns mentioned in the book (Smackover) and its portrayed milieu. Its greatest contribution was that it spurred me on to read The Recognitions and J R, the only other books by Gaddis published at the time and each re-released when Carpenter's Gothic came out. While similar in style to J R, I found it less comic (although there are funny parts) and with a bleaker outlook. Gaddis teases the reader, not revealing crucial facts until near the end of the book, but that structure makes what happens in the final chapters more impactful. I found I still liked it, even with some reservations. Saying it's not one of my favorite Gaddis novels, though, is mostly because of the high bar set by his first two novels.

A quick note: Nick Sullivan has agreed to narrate Gaddis' Agapē Agape and a collection of his essays.

Links:
Nick Sullivan's website, with a page on the books he has written

The Institute of Contemporary Arts recording of William Gaddis talking with Malcolm Bradbury, recorded on February 20, 1986, just after the release of Carpenter’s Gothic in Great Britain. My notes on the recording.

What got me started on Nick Sullivan's reading of William Gaddis' novels: The Neglected Books Page review of the audio recordings of The Recognitions and J R.

The Gaddis Annotations' page on Carpenter's Gothic, with annotations for each chapter and links to other helpful pages. The link on the page to the Great Books Foundation study guide has changed. The study guide can be found here.

Gaddis' Winter 1987 interview with The Paris Review (sometimes behind a paywall, sometimes not).

These audio versions sound intriguing - as the Neglected Books piece says, needs a virtuoso performance. I read The Recognitions many years ago and intend returning to Gaddis before too long. Good to have this nudge

I recommend listening to The Recognitions even if you've read it (one of my top 10 books...most days). It will definitely help tremendously on J R. I think in both cases, the humor is easier to catch in the audio version, but maybe that's just me.