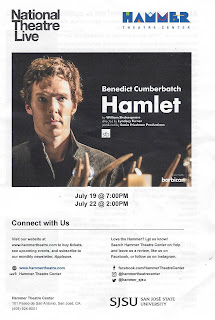 I finally got to see this version of Hamlet, the 2015 filming of National Theatre Live's production starring Benedict Cumberbatch in the title role. I had intended to see it twice before, but I had been unable to attend either time (even after buying tickets to one of them). I had a strong sense of déjà vu on Sunday when I got caught in stopped traffic due to an accident on the way to the theater, then found myself stuck in an extended line of people at the "will call" window due to ticketing software malfunctions. Despite finally getting into the theater twenty minutes after the stated start time, I only missed a few seconds of the film.

Fortunately it was worth the troubles and the wait. Benedict Cumberbatch's performance was one of the most controlled Hamlet's I've seen, never veering close to real madness, but striking in its own way as he juggles the many contradictions the prince presents. The injections of humor provide a welcome relief, partially offsetting the dissolution of characters and set. For me, this was a Hamlet you actually care about and want to see come to terms with what he feels he must do. Of the other characters, Sian Brooke's Ophelia convincingly emphasizes her brittleness while Anastasia Hille’s Gertrude effectively moves from restraint to her own madness. The set designer, Es Devlin, erected a massive interior that seems to be an additional character in the play. Director Lyndsey Turner's cuts and edits to the play work well most of the time, although some of the symbolism feels forced. There are moments where things don't quite gel or felt rushed, but overall I found it a stimulating production.

Filming a play presents several challenges in addition to a regular production. The most jarring example in this film version is what to do when actors project loudly for the live audience. On film, this seems like empty bombast. I overheard an elderly lady, heading out at intermission, complaining to her family that there was too much shouting. Well, sure. I don't know what the answer is, other than to note that versions filmed in smaller venues find this easier to avoid. I didn't find it as off-putting as that lady, but I could sympathize with her complaint.

Links:
- National Theatre Live's Hamlet page, which has screening dates and times.
Go to their main page for additional plays being screened. - An interview with Benedict Cumberbatch on this production of Hamlet